Nate and Sarah get married! 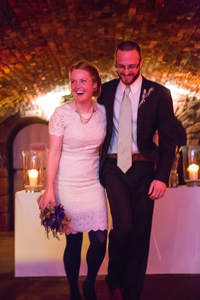 The Europe portion of my trip started with two weeks in Edinburgh, Scotland centered around my brother’s wedding. I’m extremely happy for him and his wife Sarah — they are a great couple! It was the first time my immediate family has been all together in over a year and that is always a special occasion these days, as my brother has been living abroad for many years now. It was also great to see my aunts and meet Sarah’s family. 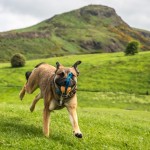 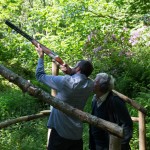 For his “stag do” (a ridiculous term they use for a bachelor party in the UK), we went clay pigeon shooting with a shotgun. This left my shoulder sore for days, and we only took about 20 shots each. I was absolutely terrible at this sport. It was a really nice change of pace, however, to be in one place for a couple weeks and have time to just relax, eat some home-cooked meals and explore Edinburgh, which is a very beautiful city. I had also enlisted my parents in bringing over some new clothes so I could stop looking like a traveling scrub and have some decent clothes to wear for the Europe portion of my trip. It turns out that swimsuits and tank tops are not as popular in Europe as they are in Southeast Asia. Who knew?! 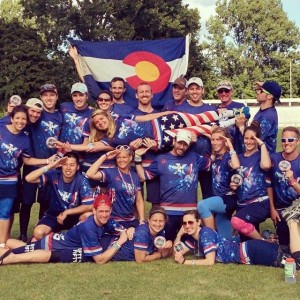 Before the idea arose for our around-the-world trip, I had been looking around the internet at some ultimate frisbee tournaments and stumbled across the website for Windmill Windup in Amsterdam. I floated the idea to some friends and a couple of them in New York (Cass and Cary) had also heard about the tournament and were excited for participating in 2014. They took the lead in planning and so before even setting off to Southeast Asia, I was pretty sure I would be hitting Amsterdam in June 2014. By the time I made it to Europe, I was excited to see some of my friends from the US who I hadn’t seen in over six months! 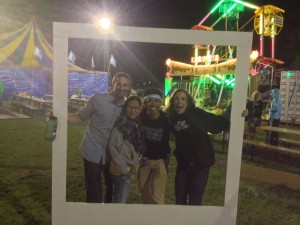 Angie from Vietnam with Ekk and Julie from Thailand — yes, there was a ferris wheel and circus tent at this tournament.

In addition, several friends I had met in Southeast Asia were going to be in town to volunteer for the tournament! Angie from Ho Chi Minh City, Vietnam, as well as Ekk and Julie from Chiang Mai, Thailand. It is surreal to meetup with friends you have met across the globe on a new continent.

One of the stories I have told many times, that shows the craziness of the ultimate community and travel, is how I managed to get a tent for two tournaments in Europe. My friend Angie from Vietnam had a trip scheduled to Europe during Windmill and I had convinced her to come to the tournament. She ended up volunteering for a week, but not before also visiting our friend Perrine in Lyon, France, who she had met in Southeast Asia at the Phnom Penh Hat tournament and I had played with at four tournaments in three countries (Thailand, Cambodia, Philippines). Perrine let her borrow a tent in France that Angie would bring to Amsterdam. I would then return the tent to Perrine in Portugal at another camping tournament the following weekend!

I arrived in Amsterdam a couple days before the tournament and got roped into volunteering since I was onsite and camping. Really, once they offered me a volunteer jersey, I couldn’t say no. It turned out to be great, as I met many of the awesome volunteers and coordinators! Ekk, Julia and Yves were also at the tournament, who I had met in Chiang Mai, Thailand — definitely one of my favorite two local ultimate groups I met on my travels.

Travel in the Netherlands and Belgium

After Windmill Windup, about ten of my teammates headed out on a Benelux adventure (Belgium, Netherlands and Luxembourg). I was only able to join for a few days, but it was lots of fun. Our first stop were the windmills at Kinderdijk. The story behind these windmills and how they have evolved through the years to help drain water from a vast stretch of land that lies below sea level was very interesting. One of the volunteers took a liking to our group and gave us a very personalized tour of the area.

The windmills at Kinderdijk in the Netherlands

This segment of the trip had been meticulously planned by our team captain, Cary, and included a 40-page travel book of how to get where we were going, the highlights of each city and all of our pre-booked accommodation. After spending six months having to figure all of this out for myself, it was great to just sit back and follow the group. Not so great for Cary, however, who had to spend her time herding us into a plan and wishing we would contribute more to the situation. It was great exploring the cities of Rotterdam, Antwerp and Brugge, including watching Belgium play in the FIFA World Cup from a public square in Brugge.

I left the group on Wednesday and took a train to Brussels where I had lunch with one of Nate and Sarah’s friends who I had met a couple weeks prior at his wedding. It seemed that whatever city I went to, I already had contacts and it wasn’t going to slow down anytime soon.

The next stop on my world tour was a beach tournament named after a beachside bar — Bar do Peixe. It is set on the shores of Praia do Meco, a beach about forty-five minutes south of Lisbon. There are only two restaurants on this huge stretch of sand that is surrounded by cliffs as you look either way down the seemingly endless beach. It is remarkably undeveloped for such a beautiful location so close to a major city.

My initial plan for Europe had been to head East after Windmill Windup — spending some time in Berlin and then traveling Eastern Europe where I would have an easier time keeping to my budget and also get to explore countries that I hadn’t yet been to. In our final months of Southeast Asia, we had been convinced to detour back to the Philippines for the Boracay Open tournament. It was at this tournament that a couple of my favorite travelers — Jano and Pily from France — convinced a few of us that if we were in Europe this summer, we absolutely had to come to this tournament in Portugal. 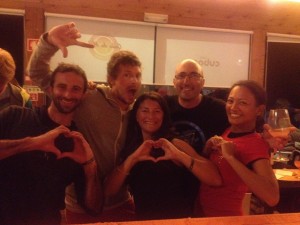 Myself, Perrine and Mitzi with exploding hearts for our friends Jano and Pily who convinced us to come to this tournament.

So it was Portugal where I once again met up with Perrine from France and Mitzi from the Philippines. I met Perrine at a tournament in Chiang Mai, Thailand — the only other traveler who had carried her cleats with the intention to play ultimate throughout the region. Mitzi was one of the very first people that Lisa and I met in the Philippines, only a couple days after we started our travels, as we met up with Lester, Mitzi and Ben in a bookstore in Fort Bonifacio in Manila. It is crazy to think back to this meeting and the initial impressions I had of people who would become some of my best friends in the region and I would see repeatedly throughout my travels — Lester welcomed us onto his teams for two tournaments, Mitzi and I attended five tournaments in four countries together, and Ben would end up hosting Lisa and I at his apartment in Bangkok on three separate occasions! 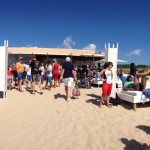 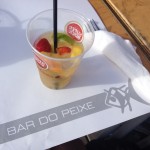 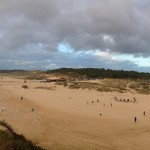 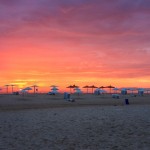 Bar do Peixe should probably be considered more of a party with ultimate players. No games start before 2:00pm and you only have two or three thirty minute games a day. In between, you spend your time at the one bar on the beach sipping sangria, mojitos and caipirinhas and eating the amazing seafood. I’d love to tell you more about this tournament, but as my friend Bats says, what happens at Bar do Peixe, stays naked. 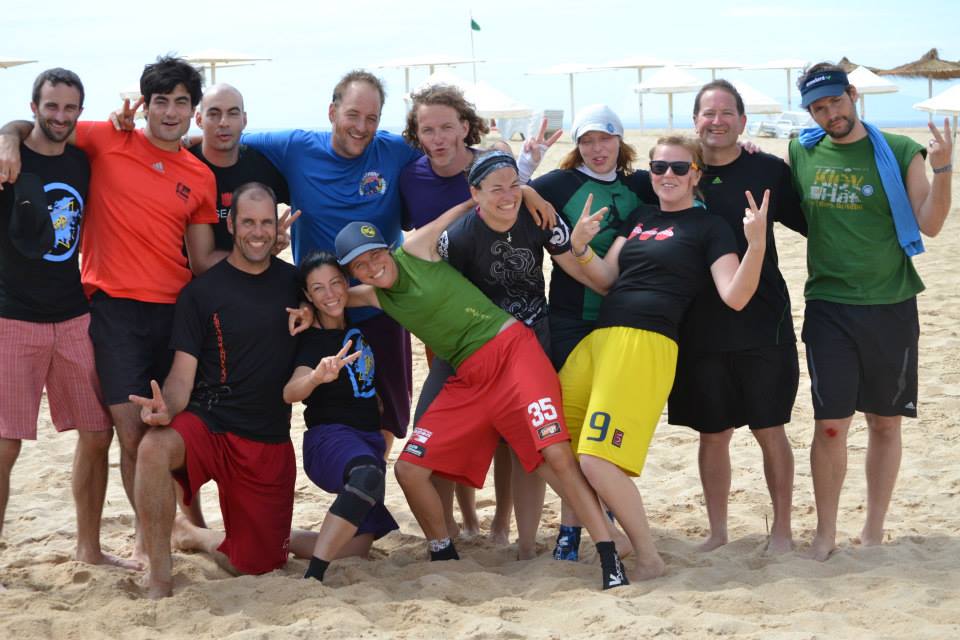 My team at Bar do Peixe — Terrible Twos!

At Home in Lyon, France

After the tournament, Perrine and I had a few days left in Portugal and I hadn’t made plans as to where I would head next. Perrine found us a great couchsurfing host in the middle of Lisbon — a thirty-year old ex-chef who was now hosting ERASMUS (European exchange) students in several floors of a downtown building. As it was summer, there were plenty of extra rooms and we were given keys to the place, tours of the city, invites to parties and even got driven to the local ultimate practice by one of his roommates who recognized us as fellow ultimate players!

A rooftop swimming oasis in the middle of Lisbon

I had been mentioning that I was feeling a little burned out on the planning and constant moving of travel. It’s not really a complaint that will tend to garner much sympathy, but Perrine could relate having just spent six months in Southeast Asia and offered to let me come to her parents’ home in Lyon for a week and just chill out and work. It turned out Mitzi would also be in Lyon for a Filipina friend’s wedding — the number of travel meetup coincidences was getting a little ridiculous, but it also meant that we got to attend a couple wedding events that were a lot of fun. 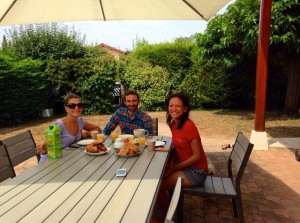 I’m a little over halfway through my stay at Perrine’s, but it has been an amazing break. It feels like home, her parents are so accommodating and wonderful, and her dog is making me miss Leela quite a bit. Having homecooked meals twice a day, being able to work at a desk, ride my bike to the local bakery and get shown around France by a friend who lives here is the best!

The collisions with friends don’t show any sign of slowing down yet. My next stop is Switzerland for an ultimate tournament where I will see Julia and Yves (from Chiang Mai and the Netherlands) again, a friend from Colorado who moved to Oslo, as well as several new friends I now have from a couple tournaments in Europe. Not to mention the organizer of the tournament, who seems to have recognized using my Perl scripts in the 1990s. After that, my goal is to head to Berlin and pause for a couple weeks. A college friend, Jawed, will be there for a few days and I have some other contacts I will try to couchsurf and play ultimate with. After that, I’m headed to Russia with my dad and brother for about ten days in August. Beyond that, who knows!

I still think the solo travel will happen at some point, but then again, I’m not fully confident in that. It is a bit crazy how frequently I keep running into friends throughout the world. However, I wouldn’t trade any of those experiences for the lure of solo travel — that will just have to come on its own.