A friend from home recently asked me to describe my travel adventures with one word. After a bit of thought, I settled on “freedom” which was the inspiration for part of my last post. But after giving it even more thought, I’m going to amend my one-word summary to “humbling.”

Having seen more of the Earth, it seems logical that the world would seem a little bit smaller. A little less mysterious and a little more known. Instead, quite the opposite is true. The vastness and diversity of the world has been even more impressed upon me than before. If I thought I was a tiny speck before, imagine how my battered ego must feel now!

Walking through, around, and up the peaks of the Himalayas during our 15-day trek of the Annapurna Circuit, I was in a nearly-permanent state of awe. This isn’t an entirely new sensation for me; I’ve been lucky enough to have traveled to many places of jaw-dropping natural beauty: the Kalalau trail in Hawaii, the West Coast Trail on Vancouver Island, Ha Long Bay in Vietnam, and Milford Sound in New Zealand to name just a few. But the Himalayas are in a category unto themselves.

The scale of the peaks and valleys was almost incomprehensible to my little pea-brain. There were countless times where I would glance up from the trail and be so stunned by the view in front of me that I just halted in my tracks. “Whoa, where did those mountains come from?!” was a constant refrain. In Colorado, when we summit peaks, we are typically at the highest point for miles and miles. We look around, and everything is below us and other mountains seem to shrink as we get higher in altitude.

In Annapurna, we never even got close to the highest peaks — we topped out at Thorong La Pass at 17,729′ (5216m) which is the highest I’ve ever been but was still thousands of feet below the peaks (ex: Annapurna I is 26,545′ or 8,091m, Annapurna II is 26,040′ or 7,937m, Dhauligiri I is 26,795′ or 8,167m). As we ascended nearby mountains, the giants continued to rise in prominence rather than getting smaller until they completely dominated our views. Arriving at the pass is a little anti-climatic because you can look around and still see how much higher the mountains go. They look down and laugh at our measly attempts at conquering nature.

Just being in the Annapurna mountain range was a very humbling experience. For several days prior to ascending Thorong La, every turn and every bend in the trail brought us a new mind-blowing vista. The sheer scale was well beyond anything I’d ever experienced, and every day, I was reminded of how physically tiny I am. And with regard to time, my lifetime is too small to even show up on the scale against the rocks. These mountains are new in geological terms, but they have withstood erosion for millions of years. There are glaciers on them that have existed long before man came along and could even consider a name for them.

In many ways, our Annapurna trek captured the essence of this trip for me. Travel reminds me how amazing and complex and massive our world is and also how infinitesimal my life is. Despite traveling for 6 months through Southeast Asia, I still have only seen a tiny
portion of the planet. And only at a very shallow level! I could travel my entire life and not see everything I want to, much less truly understand and appreciate the cultures of the places I visit. Sometimes, this is a little depressing because I know I will never see all
that this world has to offer. But most of the time, it’s inspiring because it means there is so much left to see and learn about. 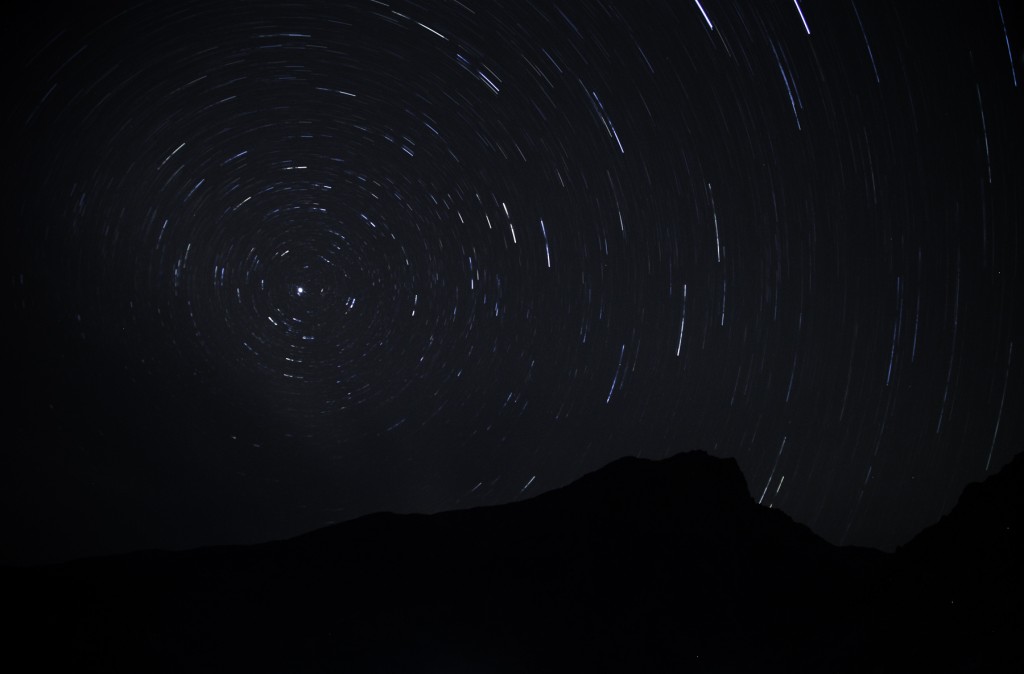 a 45-minute exposure of the stars over yakwakang peak, taken from the roof of our teahouse in Muktinath

Note: This is the my last post for a while. From May 11-21, we will be staying at a monastery just outside of Kathmandu, and I won’t be using any communication technology during that time. If I get a chance, I’ll post again before I begin the long journey home that begins on May 26th!