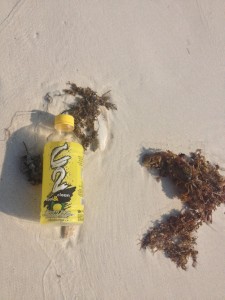 Empty bottle of C2 from Vietnam, washed up on the shores of Koh Rong, Cambodia

bubble tea
Our first stop on the trip was Manila, and it didn’t take long for us to find our first bubble teas of the trip (often called pearl milk tea in Southeast Asia). Chatime was a popular chain we encountered in multiple countries and where we had our first one, but it was overpriced and far from the best. The bubble tea shops were most plentiful in the larger cities of Thailand. The best I found was in Chiang Mai at a place called @Milk. They made a blueberry milk smoothie (blended with ice) and added pearls to it upon request. A large could be had for about $1 and I made several 30-minute walking trips across the old town center just to score one of these.

C2 – A sweet tea / lemonade combination
We didn’t actually discover this drink until Vietnam, so it is heavily associated with quenching our thirst in that country during December 2013. Upon on our return to the Philippines in March 2014, however, we noticed it again for the first time since Vietnam and relived our enjoyment of this sweet tea and lemonade combination on the shores of Boracay Island. We had been missing it, a feeling that only intensified during February 2014 on the shores of Koh Rong, Cambodia where we were close enough to Vietnam to have empty bottles washing up on shore.

bac xiu – strong iced coffee with extra condensed milk
Like beer, coffee is a drink I do not enjoy. I guess I have just never developed a taste for bitter flavors. I have tried many drinks in my lifetime where friends insist you will love this, it barely tastes like coffee! Surprise, no, I never liked them. That is, until a couchsurfer in Hoi An, Allister, introduced me to Bac Xiu. 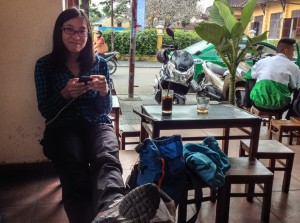 drinking iced coffee at google cafe on a day in Hoi An when locals were bundled up in jackets.

Throughout our time there, Lisa had been ordering iced Vietnamese coffee (ca phe sua da), which is known for being very strong and delicious. This particular version was always served with a small amount of condensed milk in it as sweetener. I did try a bit of Lisa’s, and while it hadn’t been bad, I still had little desire to order my own. We were with Allister in Hoi An’s Google Cafe (no known relation, despite an eerily similar logo) when I saw him order a Bac Xiu. What came out was a drink similar to what Lisa had been ordering, but with double the condensed milk and half the coffee. Now, this is a drink that maybe I could get behind. Ordering my own, I confirmed my suspicions, and multiple glasses would be ordered on each return visit.

thai iced tea
If you have been to Thai Pot Cafe with me in Denver, you know I love Thai Iced Tea! My only complaint is that it doesn’t come with free refills. Not a problem in Thailand where you can have a glass for about fifty cents. The best I encountered was in Koh Phi Phi at a small stand outside a hair salon. My only issue is that they loaded the glass with ice, leaving only a small amount of tea. My solution was to drink it all, dump half of the ice and then ask for a refill without any extra ice. Apparently they have seen this trick before, and wanted to charge me double! siiiiiigh

fruit shakes
Koh Phi Phi (and elsewhere in Thailand) also had amazing fruit shakes. For little more than a dollar, you could mix up any grouping of fruits and it would be combined with sugar water, ice and some condensed milk to form the perfect island beverage. My favorite combination was Strawberry / Orange, although Strawberry / Pineapple was a close second. They also had some delicious fruit shakes in Boracay, where I discovered that watermelon shakes (sometimes with rum that costs under $3 per 70cl) are amazing. Shakes in the Philippines were about twice the price, however. 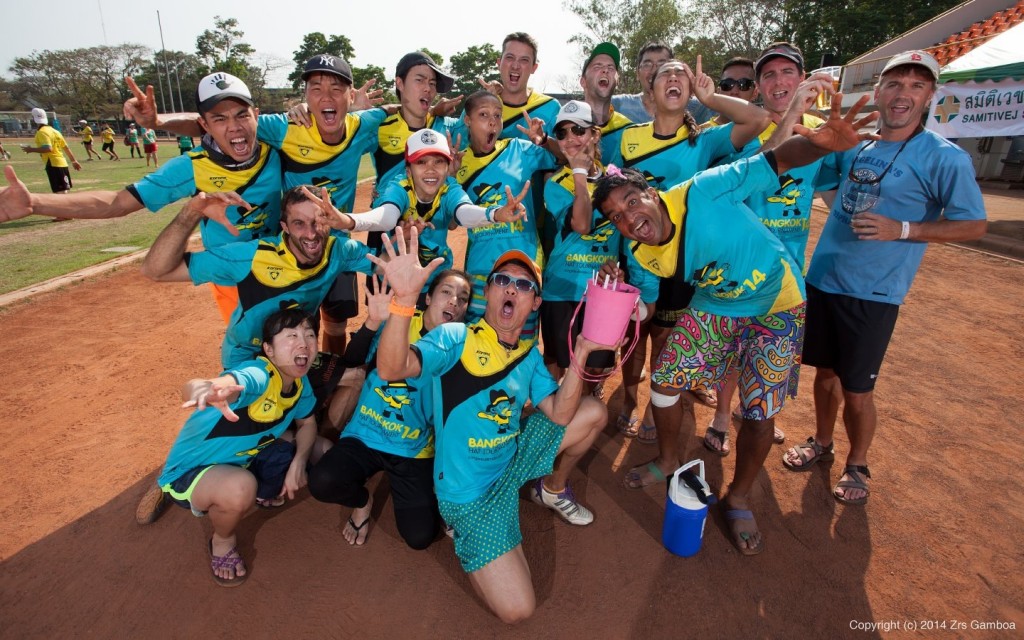 buckets
Koh Phi Phi turned out to be a pretty great place for beverages and I think I was drinking something non-stop on this island. It is also a major party island and they do bucket drinks like nowhere else. For $4 and up, you can have frozen daquiries, mojitos and more mixed up in an actual bucket to carry around the island. It also inspired our team name for the Bangkok Hat ultimate frisbee tournament — Buckets for Breakfast. Eddie from Bangkok was on our team and is well known in the community for bringing some delicious vodka, mixers and of course, buckets with plentiful straws. It wasn’t until he broke these out mid-day on Saturday that our team really began to gel. 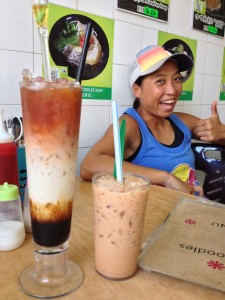 teh ais and three layer tea
Malaysia had an iced milk tea concoction (teh tarik on ice, ordered as “teh ais”) that was very similar to thai iced tea, although both Lisa and Cara enjoyed the Malaysian version much more. There was also a delicious three-layer tea drink which was tea, sweet milk and brown sugar. Served separated, you would stir them up and it was even sweeter and more delicious than the teh ais (also pricier).

milo godzilla
We would encounter Milo throughout Southeast Asia — a chocolate powder used to make chocolate milk or add flavoring to drinks. We were out for an after-dinner dessert with Maureen (and her brother Bernard) in Singapore one evening when she suggested that we try the Milo Godzilla. When it came out, it was so delicious that I had to write down in my notes how I could make these at home:

Of course, that was only the beverage portion of our dessert and we also had apple-cinnamon parata which we dipped into a curry sauce. Unexpectedly amazing as well.

These countries were huge letdowns when it came to beverages. I occasionally found a decent drink or bubble tea here or there, but nothing that became the staple for either of these countries. I got so desperate at one point that I entered a Phnom Penh Dairy Queen looking for refreshment! I walked out immediately when it was clear I couldn’t get a Mint Oreo blizzard. 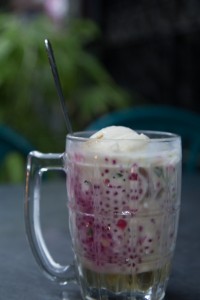 Faluda
My first night in Myanmar I decided to wander. I stumbled across a cold drink shop, something that is very common on the streets of Yangon. They serve a variety of beverages and ice cream. Perusing the menu I saw a drink that had what looked like ice cream, custard and several different types of gummy-like toppings. I asked for the name, Faluda, and ordered one of them for 1200 kyat ($1.25). After polishing it off in record time, I grabbed another one each of the next two days in Yangon and plan to have many more throughout Myanmar whenever I come across them. Yummmm!!!

One thought on “favorite drinks”