We weren’t supposed to make it to Boracay; we’d already been to the Philippines in November and didn’t want to loop back when there’s so much else to see, and the cost of getting to and playing in the tournament on a touristy island was way out of our budget. But we did it anyway, and it was one of the greatest times of my entire life. #sorryimnotsorry 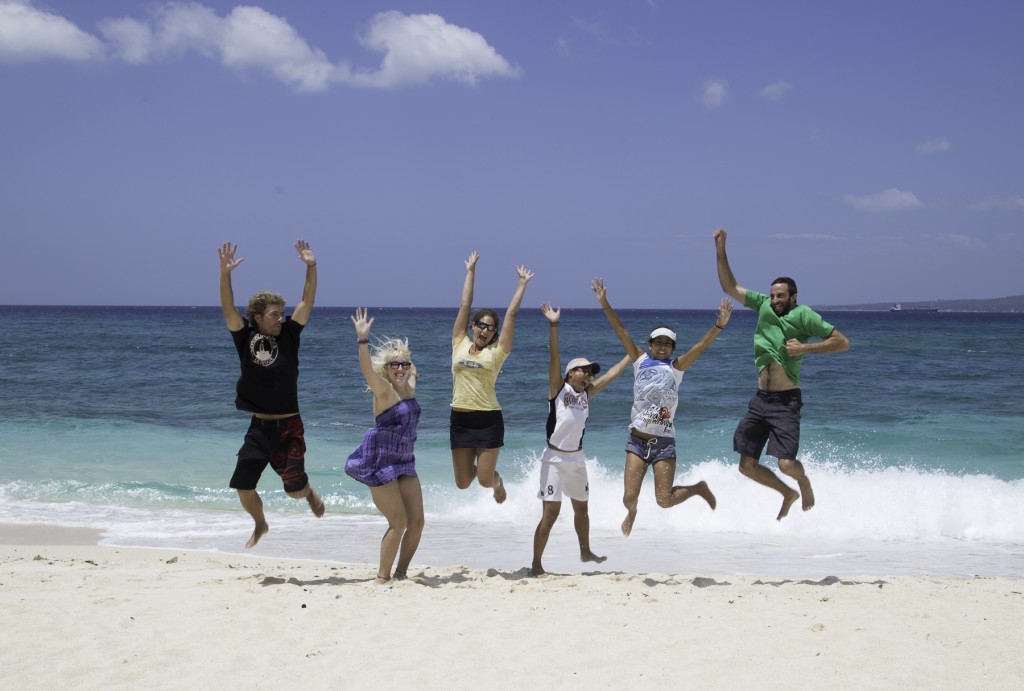 Sadly, not all events are fit for public consumption and online perpetuity, so this is a PG-13 version of our week in Boracay.

the tourney and the pandas
The Boracay Open is a 3-day beach ultimate tournament held every March. It is well-known as a party tournament, and after Matt and I’s partying at Manila Spirits in November, all of our Filipino friends tried to convince us that we absolutely had to attend Boracay. Games start after 11 (since everyone is too hungover to get up any earlier), there is a maximum of three games a day, each of which is only 45-minutes long, with a bye between all of them, and done by sunset so that people can grab dinner before the awesome party each night.

Like Manila Spirits, Boracay was one of the most well-organized and well-run tournaments I’ve had the pleasure of attending. The tourney fee covered lunches each day, swag (disc and tournament jersey and nice beach bag), and free booze at all of the parties which is no small cost given ultimate’s alcoholism. 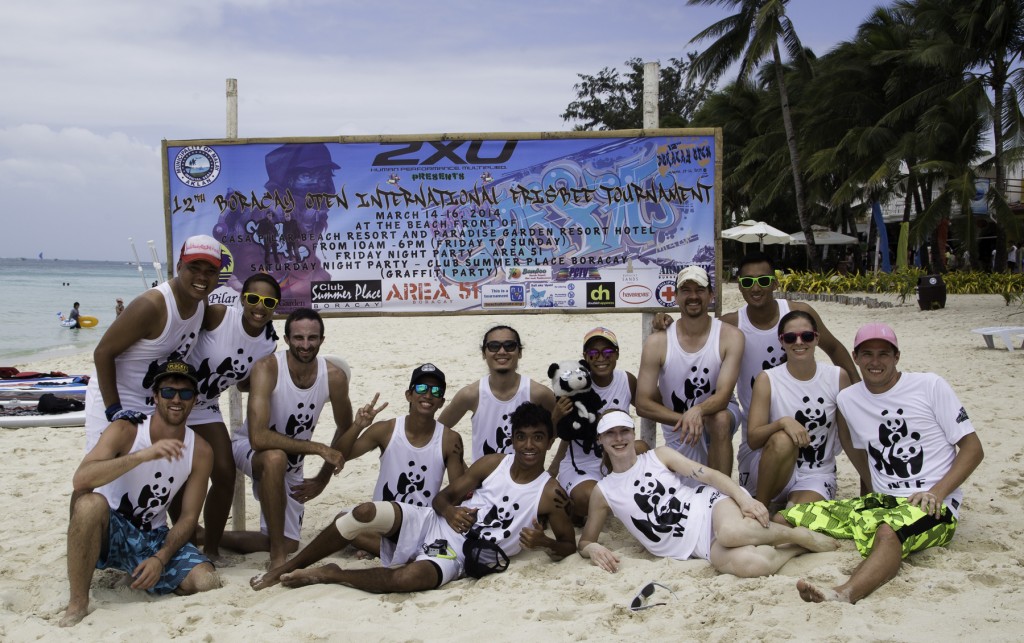 Our team, The Pandas, was a pickup team of various players brought together by Lester, a Filipino pillar of the Southeast Asian scene. Many of us had never met or played together before the tournament, but it turned out to be an incredible group of players, and I’m still in awe of how fortunate we are for having gotten on such a fantastic team. Everyone was the perfect mix of super fun, competitive/chill, and party animal. We went from strangers to one of my favorite collections of people in the span of just a few days. Despite going 1-2 on Friday, we gelled on Saturday (3-0!) before losing in the Pool B finals on Sunday.

More importantly, however, was that the Pandas won the Party Award! How? Umm… items that can be shared:

the importance of ultimate on this trip
Traveling has been awesome because of the people we meet. Having friends to share the adventure with is crucial to how much we enjoy ourselves. We’ve formed deep friendships with many of the people we’ve met along our travels. But that high also leads to lows when we inevitably have to part ways and say good-bye without knowing if you’ll ever see your new friends again.

Ultimate has been our savior in this way as it has provided a form of continuity and community for us — we have been able to meet up with other ultimate players repeatedly throughout the region as we follow the same tournaments and meet many mutual friends. For example, we first met Pily and Jano, a Colombian-French couple, playing pickup ultimate in Hanoi back in early December. We convinced them to play in the Ho Chi Minh Hat tournament later that month, and we would also see them again at the Bangkok hat tournament in mid-February. Finally, they convinced us to come to the Boracay Open in March where we last saw them. I eagerly look forward to their visit to Colorado in July! 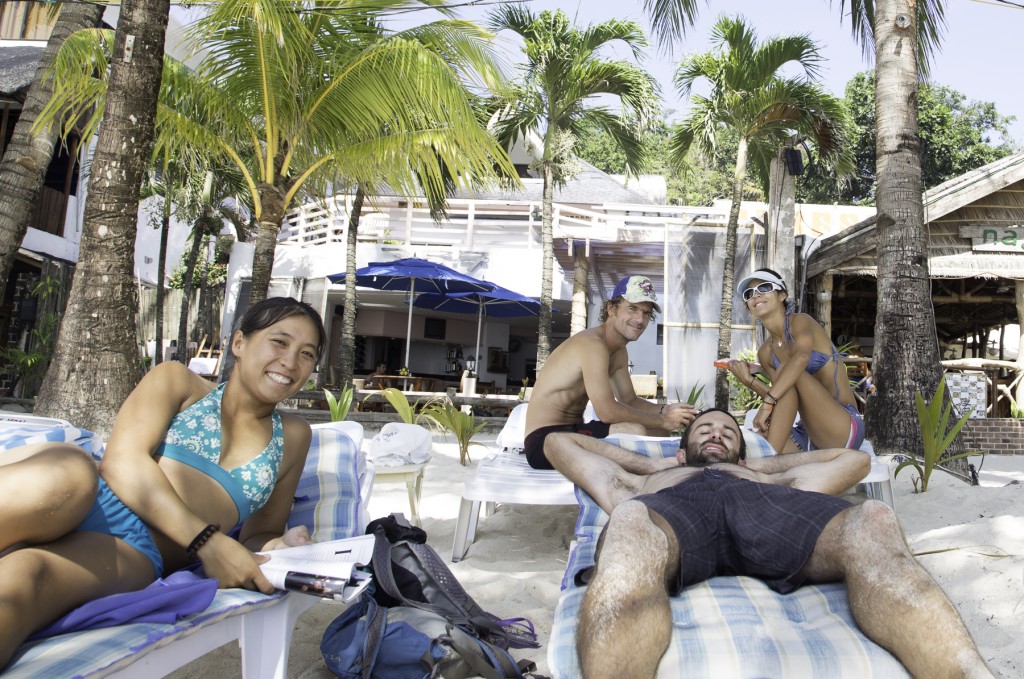 us relaxing with Pily & Jano on Boracay post-tourney

They are but one example of the many friends we’ve made in the Southeast Asian ultimate scene. Having these friends and knowing that we would keep seeing them made it feel like we were part of a community or family, and we were able to look forward to seeing our friends on a semi-regular basis. It went a long way in helping me not feel rootless and adrift alone in this great big world. 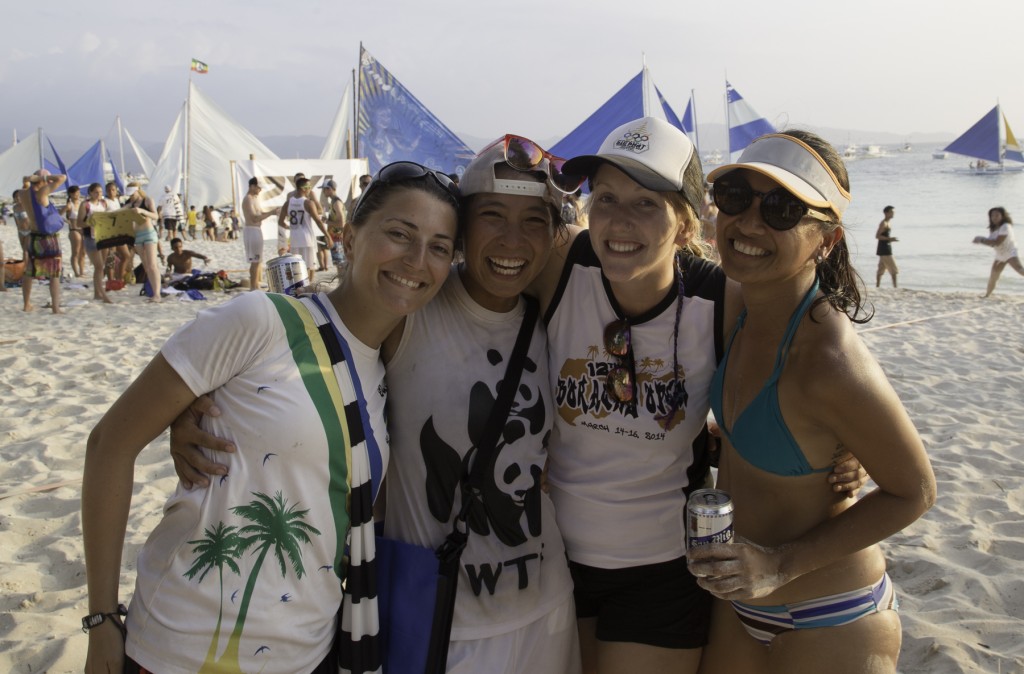 Perrine, myself, Corinne, and Mitzi in Boracay — other traveling ultimate players we’ve seen at multiple tourneys in Southeast Asia

At home, the Denver ultimate community is great — the vast majority of our friends are ultimate players, and it’s an awesome community that I love belonging to. Traveling around the States to tournaments and playing teams from around the country, it’s readily apparent that ultimate attracts a certain type of person: someone who enjoys chasing plastic will typically be friendly, fun-loving, hospitable, open-minded, adventurous, harbor a love of awesome dance parties and prioritizes friends and experiences over what society dictates should be important (i.e. work). It’s basically a group of people who “refuse to grow up.” In the best possible way.

Finding the same group on the road has been the best unexpected part of this trip. For some reason I didn’t expect the international ultimate scene to be this similar to our group at home. I’ve been impressed with all the ultimate players we’ve come across in Southeast Asia. Everyone has been so overwhelmingly friendly and welcoming that I’ve even begun considering one day living in Asia (though not until my elite ultimate days are done). Even thousands of miles from home, we are part of a community of people who share a passion for chasing disc and being a part of this incredible family. We are part of something much greater than ourselves.

At the outset of this trip, I said that playing ultimate on this trip wasn’t a priority for me. Good thing I was wrong! Playing disc and meeting so many wonderful people through it has been one of the greatest parts of this adventure.

Unfortunately, Boracay was our last tournament in Southeast Asia, and we had many sad farewells at the end. Even though it didn’t make sense and blew our budgets, it was worth it to be able to play and hang out with so many of the friends we’ve made on this trip one last time. I don’t know when or if we’ll see some of these people again, but I’m so thankful to have crossed paths and shared so many memories with them. 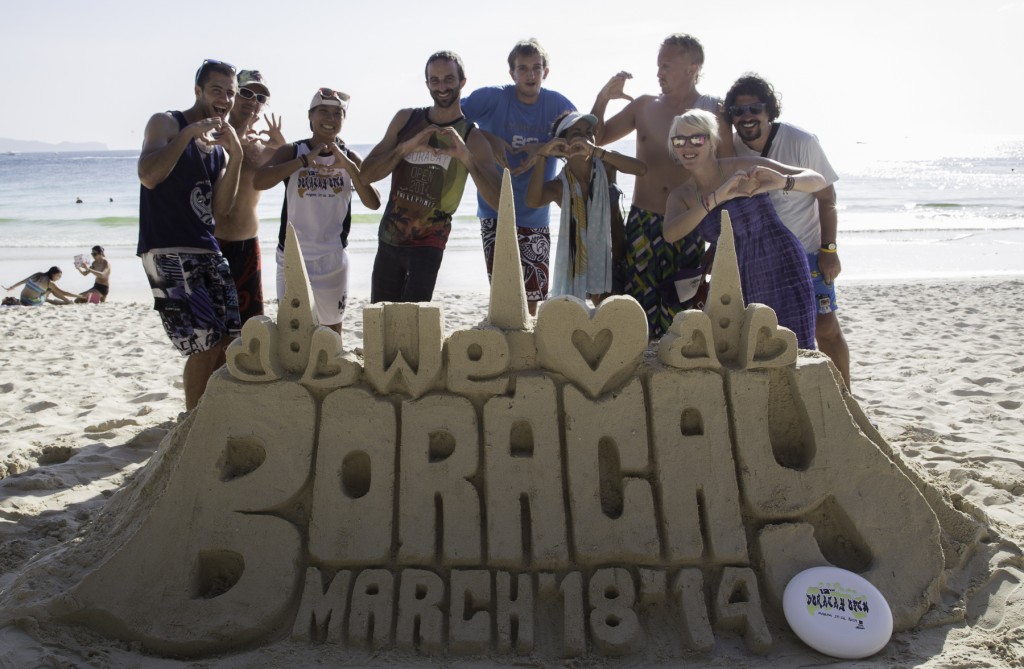 headed to pickup a few days after the tourney