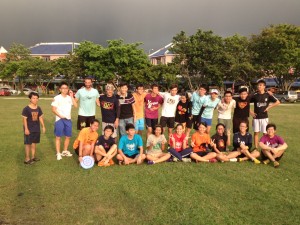 Kampar had certainly not been on our list of places to visit. The initial route I had researched through peninsular Malaysia was George Town, Penang -> Cameron Highlands -> Taman Negara National Park -> Perhentian Islands -> Kuala Lumpur. Because it was the rainy season, I soon found out we’d need to skip Taman Negara and the Perhention Islands. I decided our new route could head through Ipoh, a town 45-minutes North of Kampar, after Cameron Highlands and on our way to Kuala Lumpur. There wasn’t much to see in that town, so a night would be plenty. I shot off an email to the X-Cross Ultimate organizers in town to see if they really played every night. Turns out that they do.

After hitchhiking from Cameron Highlands to Ipoh, I grabbed some lunch, confirmed that the game was on, and hopped on the 3:00pm train for my trip from Ipoh to Kampar. It was only about 20 minutes, cost $4 USD and was a very clean, comfortable and smooth ride. I informed Caleb (one of the X-Cross organizers) of my arrival time and he replied that since I was arriving early, the game was being moved to 3:30pm. Normally they play at 5:30pm, so I assured him it wasn’t necessary to change it on my account, I would wait around. He thanked me and moved it to 4:00pm and asked me to catch a taxi to the UTAR Sports Complex, a field at the local university. It was a local holiday, so all of the players (students at the local campus) had the day off school.

As I pulled up to the UTAR gates, they remained closed to the taxi I was in. I paid the driver, hopped out and had security immediately ask what I was doing here. “Uhhh, I’m coming to play ultimate frisbee. Some friends play here every day.” He asked if I realized that the car I just rode in was not a legitimate taxi, but that had been pretty obvious the moment I stepped into the vehicle. “OK, I’ll just wait for my friends to arrive.” I texted Caleb from inside the security office and he assured me I was in the right place. Security started making phone calls to figure out what I was doing, since no one had informed them the fields would be in use, and where was I from, anyway?! Soon, a better English-speaker (that I think security had called) pulled up in a car and informed me that the fields need to be pre-booked and did I want the phone number to the person where I could get permission? No, shit, I’m thinking, my “friends” play here every day, do they do it without permission and am I getting them in trouble by not saying the right things? I am definitely not trying to reserve some fields right now! Let’s face it, most pickup games don’t reserve fields and I’ve had a couple run-ins with Denver Parks Department officials who insist we need a permit to play on the fields at Washington Park (a permit that doesn’t exist and that they will never issue, by the way). 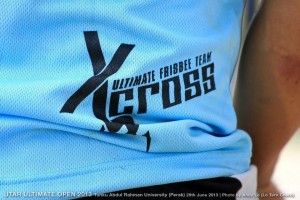 A few minutes later, several of the players show up on motorbikes and I get reassured that I didn’t mess anything up for them. Because I was coming into town, they had tried to reserve the really good fields at the last minute, but never had their calls returned. They asked if I would be willing to play on fields that weren’t quite as nice. “Yeah, I just came to play some pickup ultimate and meet new players — let’s play where you normally do!” I couldn’t believe they had tried to reserve some special fields just because I was here. So I hopped onto the back of Tom’s motorbike and we headed out of UTAR to an open field in the city. When we got to the grass field, I reassured them it was not bad at all and remarked that in Cairo they play on a patch of dirt. The whole city is an open-range for cattle, so there were a few hot-spots to watch out for, but other than that, it was great!

At their request, I taught them a couple drills they hadn’t seen before (break-mark practice being the most useful) and then we scrimmaged for a couple hours. This is an amazing group of friends that was so warm and welcoming to me. They had turnout of more than 25 players, almost half of whom were women! Tom is the person who started the club five to six years ago, and they are a little worried that it might fall apart once most of them graduate in the Spring. I inquired about buying a jersey from their team to remember my time there. They hadn’t printed any extra, but Michael, who had two, gladly gave me his as a gift! Tom took me to the train station twice to make sure I had a ticket for the night ride back to Ipoh and to get me to the train once I was ready to leave. While the group photo was being taken about 7:00pm, a torrential downpour came out of nowhere and continued until I was ready to go at 8:30pm. We took refuge in the nearby restaurant where I had some Dried Chili Pan Mee ($1.30 USD), and many of the players waited around in the cold to make sure I had a great time. I was told that three years ago they would have just played through the rain.

One of the female players, Demon, used to go to school in Kampar and was just visiting from Kuala Lumpur. She was headed back to KL the following day and offered to take Lisa, Cara and I to MyBurgerLab in Petaling Jaya a couple days later. We were glad to accept that invitation and the burgers really hit the spot! I had the Fat Elvis — two patties, sharp cheddar, blueberry jam, peanut butter, and carmelized onions. It sounds weird, but like all of the combinations we tried that night, was amazing. All of this is just to say that ultimate players are the best around the world, and I am always thankful to meet them throughout my journey!

One thought on “X-Cross Ultimate in Kampar”