If you hang out with Lisa and I often, you will notice that we wear a lot of plaid. Surprisingly, however, none of it was brought on this trip. Instead, our wardrobe was ultimate jerseys, plain shirts and hoodies. I think my choice of clothing for the trip is what I have regretted most on my packing list, as I get tired of wearing sports fabric the entire time. Lisa had done better, packing a couple lightweight merino wool shirts that look really comfortable. Everything I had read said to leave jeans and heavier material at home in Southeast Asia, as it would be too hot and humid to make that clothing worthwhile. Yet, everywhere we went, we seemed to run into other travelers who were dressing much nicer than we were and we had no way to step it up.

Enter Hoi An, known for its great food, silk fabrics and abundant custom tailoring. The Ancient Town of Hoi An is an even mix of clothing/tailor shops, art/souvenir shops and restaurants. This city was not going to be kind to our travel budgets, but more on that later. 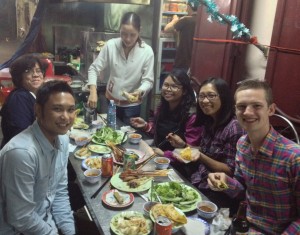 We arrived the in evening and headed straight to the weekly couchsurfing meetup that was arranged by Allister, a Filipino who has been living in Vietnam for a couple years and now considers Hoi An his home. The police in Hoi An are aggressive in enforcing a ban on couchsurfing, handing out $500 fines (and your neighbors are likely report you). Although we knew we weren’t going to be finding a place to crash, we wanted to meet some locals to hear more about their life in Hoi An and get good tips for the upcoming weekend. The couchsurfing community that we encountered in Hoi An is all ex-pats, and we would end up spending a lot of our time with our new friends Allister, Kong from Holland, Sean from Australia and two of Allister’s close friends from the Philippines that were visiting.

Allister and Kong were constantly checking in with us throughout our stay, inviting us to local events and taking us out to eat. When Lisa and I were on our own, we struggled to find the best spots for street food, but with these guys as our guides, we were eating some of the best food of our trip at local prices (not always easy to do). We quickly fell in love with the vibe in Hoi An, and what was going to be a few night stay turned into a week.

Our first full day in town, we decided to split up and go check out the ancient town at our own pace. I rented a bike ($1 a day) and had a target list of a few tailors I was going to check out. My wish list for clothing was a lightweight merino wool shirt, a plaid short-sleeve and some new travel pants. At the first shop, I explained what I was looking for and was told that yes, they have that fabric and it would be no problem. As I looked at the fabric, it became clear that “yes” is just what they were going to tell me. I wasn’t happy with what I found and was zipped by motorbike five minutes away to the warehouse that had all of that shop’s fabric. Not finding what I wanted, I realized that this wasn’t going to be the place to find fancy synethic sports blend fabric. The entire industry is geared around suits for men, dresses for women, jackets and shirts.

A short boat trip through the ancient town on our final day in Hoi An.

So I changed my frame of mind and decided that maybe I should consider a suit. It seemed like a good souvenir — something I would use in the future and actually needed. I bought my existing suit over fifteen years ago in high school, and while it still fits, a style update was sorely needed. Because we didn’t know how long we would be in town, my plan was to guage prices at a few tailors and then get an order in so that I would have time if multiple fittings and adjustments were needed.

It was at the third shop that I finally placed my first order for a two-piece suit, having looked through a book of design styles, selected the fabric, lining color and other details and negotiated down the price from $160 to $120. I wasn’t in love with this price, as it had been in the upper range of a previous shop’s pricing, but I knew from TripAdvisor that this was a good shop and so I decided to go for it. The pricing in Hoi An is almost entirely dependent on the fabric you choose, not the style details of the garment you select to have made. As someone who doesn’t know anything about fabric, or necessarily trust what the salesperson says, this makes comparing quotes difficult.

On top of that, neither of us is used to negotiating for purchases, and sometimes you’ll be caught off guard. You’ve mentally prepared to negotiate, but then they quote you a price so much lower than you were expecting, or would pay in the states, that you end up just losing all willpower to negotiate and accept what they tell you. The salespeople, however, do this all day, every day and are experts at disarming you and getting the price they want. Well, almost every day — the lady I bought my first suit from told me she gets one day off a month after I inquired. It’s not uncommon to walk into a shop and wake up the staff who have been taking a mid-afternoon nap on the floor. As Allister told us when we asked why he was working on a Saturday, “this is Vietnam,” and many people are working multiple jobs every day to provide for their family.

“You’re not wearing plaid today, are you?” Yes, we now need a wardrobe schedule. As Lisa would tell you, this isn’t The Amazing Race where we dress alike.

It had been several hours now, so I decided to text Lisa to see how she was doing. Turns out, we were both blowing our budget on the first day — she had picked up an oil-on-canvas painting, a Vietnam tank-top and a cloth lantern. The damage would not stop there. That night Lisa decided she was going to have a plaid shirt made and we walked around shops looking at fabric. We ended up back where I had bought my suit and she placed an order. Then another order for a jacket as we walked home that night. We were losing self-control.

Turn-around on custom clothing is generally next-day, so less than 24 hours later we were back in the shop trying on our items. My suit had some adjustments I wanted made and even though I didn’t really want a dress shirt to go with it, I found myself negotiating a price and picking out fabric, as it was hard to visualize the suit without one. 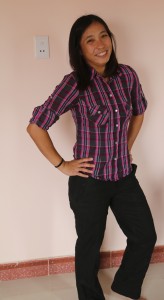 The following day we picked up all of our clothes and took a cooking class. It seemed like maybe we were done shopping and that night we decided we would stay in Hoi An for a while, as we were enjoying the relaxed atmosphere and had been having a great time with Allister, Kong and Sean. I spent most of the afternoon annoyed that Lisa was now looking good in her new fitted plaid shirt, and she took every opportunity to flaunt it.

The next morning we woke up and went out to breakfast with Kong. He took us to a bánh mì shop that he described as happy food — food that will make you smile. He had witnessed us a couple nights before polish off two servings each of fried chicken and rice, so he knew we liked food. It certainly did not disappoint: fresh, warm french bread dipped into a bowl of delicious soup that had a sweet curry taste. Afterwards, I went to hear about a motorbike tour into the surrounding villages, but it was raining and the weather didn’t look like it would let up for a few days.

Rain. What are we going to do? I guess we can go walk around town a bit. That, of course, was a huge mistake because, by the end of the day, two people (who don’t even love shopping) had ordered the following: an additional suit, two more jackets, three more plaid shirts and two pairs of travel pants. I was finally believing I had negotiated well for these items, so that felt good, but we were now settling into the fact that we would be taking a $25, 25-hour bus trip to Saigon, instead of a $45 flight, to make up a small part of our massive budget over-run.

Unfortunately, we had shipped most of the items home via 4-month sea-mail before I remembered to capture photos of everything we bought!

One thought on “We’ve gone to plaid!”