I love eating. It’s one of my favorite activities, which is convenient since I’m almost always hungry. I’m known for consuming obnoxious amounts of food and then being hungry shortly after. I’m also known for being hangry, but perhaps that’s a post for another time. Or not.

For something that I spend an inordinate time doing, I have a very poor vocabulary around eating and food. I also don’t have a very discerning palate and rarely know what is in a dish, only whether or not it was delicious. In spite of all this, KK asked for a post on food, so here we go…

filipino food
Our culinary adventure started off slowly and plainly. I was actually rather disappointed in the Filipino fare which was very meat-heavy. The only dish that I really liked is sisig which is made up of chopped pig’s head and tastes much better than it sounds. A pig’s head is boiled and then chopped up and grilled or broiled. Then it is fried with onions and served on a sizzling plate. Even Matt enjoyed this dish before he realized what was in it! We also tried crocodile sisig which was delicious, but the taste of the actual crocodile meat was masked by the overpowering (but tasty) sauce. I went ahead and assumed it tasted like chicken.

One of the weirder things I ate in the Philippines was balut. This is a duck egg that has been fertilized, and you can see the embryo of the duck as you eat it. Commonly thought to give you an energy boost, people like to buy these late at night (kind of like a Red Bull). I had two while I was black-out drunk, and I’m told that I loved them. However, I had one sober a week later and did NOT enjoy it. It really just tastes like any other chicken egg, but seeing the little embryo before eating it ruined the experience for me. I will probably get another chance to eat them here in Vietnam or throughout the rest of Southeast Asia as they are considered delicacies in this region, but I’m not sure I need to.

Street food in the Philippines was not spectacular. Most of what we had wasn’t Filipino at all, but imports from other Asian countries like sio mai (pork & shrimp dumplings) and sio pao (steamed buns). Other notable things we ate: lots of grilled squid, grilled eggplants, and tons of delicious fresh crab ($5 USD for a huge plate!). I’ve had grilled squid before, but it was a huge step for Matt, and he enjoyed it.

One of my favorite food discoveries of the Philippines was Jollibee, their version of KFC (KFC is also hugely popular in the Philippines). Jollibee is the most popular food chain in the Philippines, even over Starbucks and McDonald’s! Their fried chicken (chicken joy!) is incredible, and they have perfected this gravy that I’m addicted to. I was probably a little too excited when I found out Jollibee is available in Vietnam and the US, and I may or may not gush about Jollibee to every Filipino that we meet in our travels… awkward.

vietnamese victuals
The food in Vietnam is incredible. The street food culture here is unparalleled: there are tons of “vendors” set up all over the sidewalks and in alleys, and you just plop yourself down in one of their little plastic seats, and a plate of deliciousness is brought to you. “Vendors” is an inaccurate phrase; many of these places are run by one little old lady cooking up your food right in front of you. 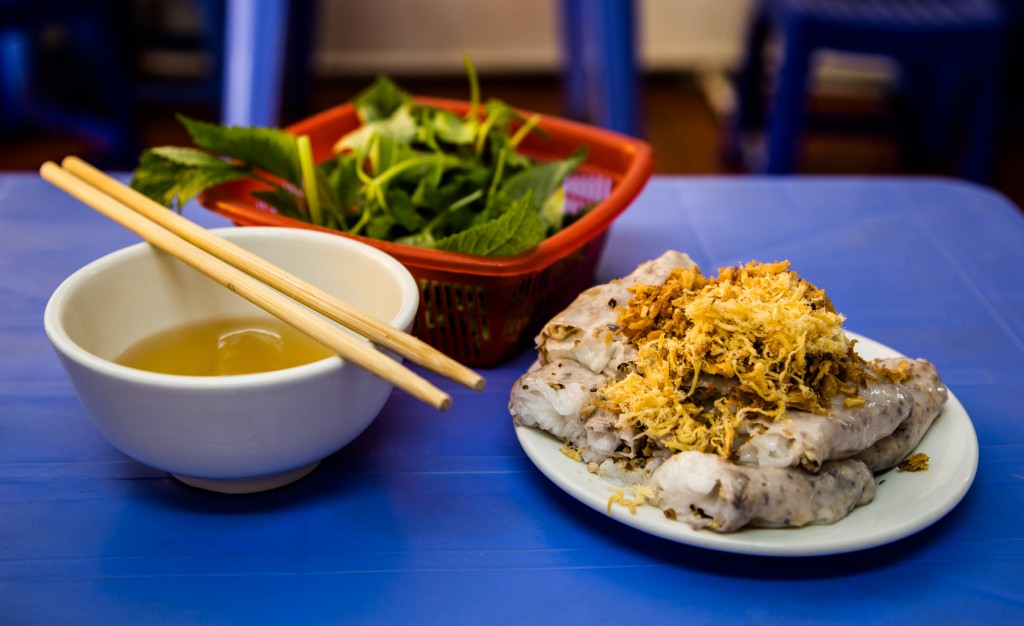 In Hanoi, there are many places that serve only a single dish — it’s all they do, and they’ve perfected it over decades. We had pho bo (beef pho), bun bo nam bo (vermicelli noodles with grilled beef), and bun ca (vermicelli noodles with fried fish) at stands where they were the only dish available, and they did not disappoint. You just have to find the stand or restaurant, sit down, and a plate or bowl of amazing is given to you. Awesome.

Surprisingly, I think Filipinos like rice more than Vietnamese do, but Vietnamese have a much greater variety of rice: rice crepes, rice noodles, rice paper and beyond. Additionally, there are different types of noodles to be used in different dishes. Vietnamese food varies dramatically by region, but it’s always very fresh with cooks running out to the market repeatedly throughout the day to get more herbs and ingredients.

We are currently blissed out in Hoi An in central Vietnam. We had only intended to stay two or three nights, but we’ve already been here five and are now planning to stay as long as we can before we have to go to Saigon for a hat tournament. We opted to skip famed tourist destinations Nha Trang, Dalat, and Mui Ne all in favor of Hoi An! Part of the reason is the amazing food we have found here (and also because we’ve lost our minds and shopped ’til we dropped). Hoi An’s reputation as the food capital of Vietnam is completely warranted.

On our first night in Hoi An, after an interminable 27-hour bus odyssey from Cat Ba island,  we were able to join a weekly couchsurfing meeting where we met Allister and Kong. Both are expats living in Hoi An, and they know all the great food spots, and so we [obviously] latched on to them. They’ve been great hosts and have taken us around town to some incredible food (and helped us not get ripped off). With them, we’ve eaten some of the best food of the trip including cau lau (a noodle dish Hoi An is known for), com ga ro ti (fried chicken and rice), bun cha ca (vermicelli noodle soup with fish cakes), delicious tofu and vegetarian fare, and ate at Bale Well.

At Bale Well (pronounced bah-lee well), they serve you platters of banh xeo (rice pancakes), fried spring rolls, grilled pork, satay pork, and tons of veggies and herbs. You roll ALL of these ingredients together in some dry rice paper and dunk it all in a delicious bean-based sauce. I may have frightened people with the amount of food I crammed down.

While the street food here is delicious and cheap (average $1USD per plate), the portions are not what we’re used to getting back home. Matt and I both consume vast amounts of food, even stateside, and so it isn’t unusual for us to still be hungry after one serving here. At the fried chicken place, Matt shocked everyone at the table when he ordered a second heaping plate of fried chicken and rice. Oddly, when I ordered a second plate a little later, no one really blinked an eye…

In the weird food category, I ate a century egg in Hoi An. I’d seen these black eggs before at dim sum places in the States, but I’d never eaten one. After Kong described the egg to me, I wasn’t sure I wanted one, but I’m not exactly known for using good judgment and ended up eating one. The consistency of the yolk is… off. It’s somewhere between jelly and a solid. If you can get past that part and the color (both the egg white and yolk are black), though, the egg is actually pretty tasty; sweeter than the usual hard-boiled egg.

We also heard stories of people killing cobras (or was it vipers? does it matter?), drinking the blood (mixed in a drink), and then eating the still-beating heart. I guess they also put the venom into a shot, and the venom makes your mouth go numb (or makes you pass out in larger doses). It sounds like this is more of a tourist novelty and not something commonly done. I will usually try almost anything once, but even this seems a little too extreme for me. 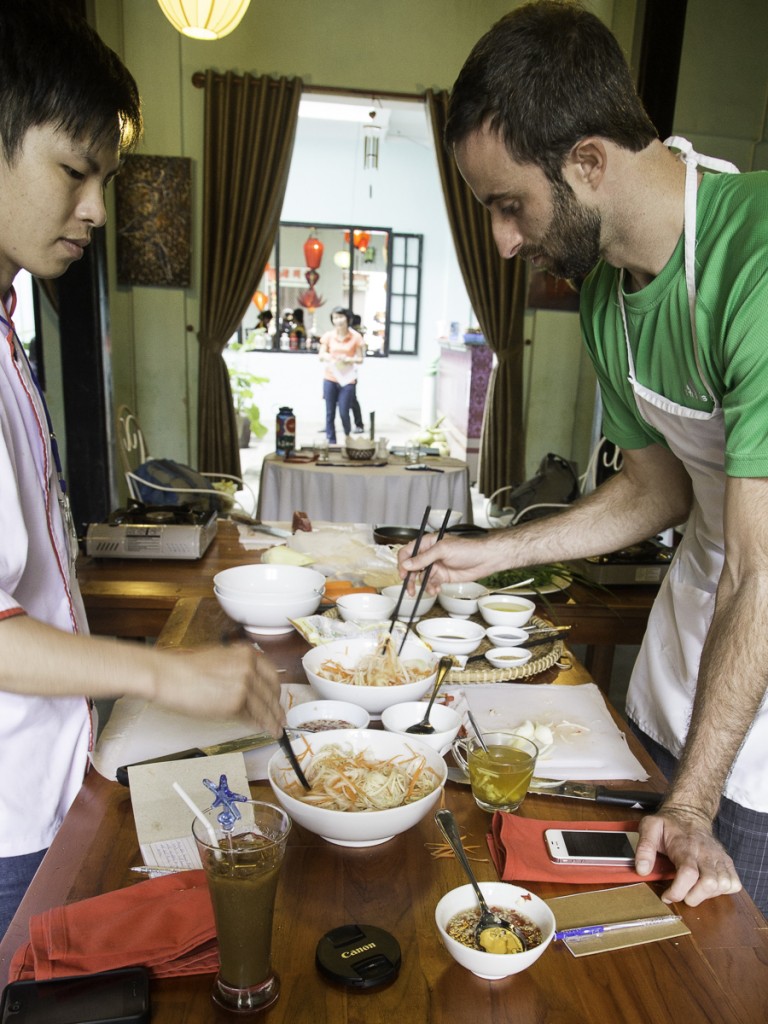 Matt and I took a cooking class in Hoi An. Neither of us cooks very much at home, but we’d heard from other travelers that it is a fun experience, so we signed up. We actually forced our way into getting a private class since I didn’t want to learn how to make spring rolls (this is the one Vietnamese dish I am already comfortable at making), and we ended up getting an afternoon session for just the two of us! 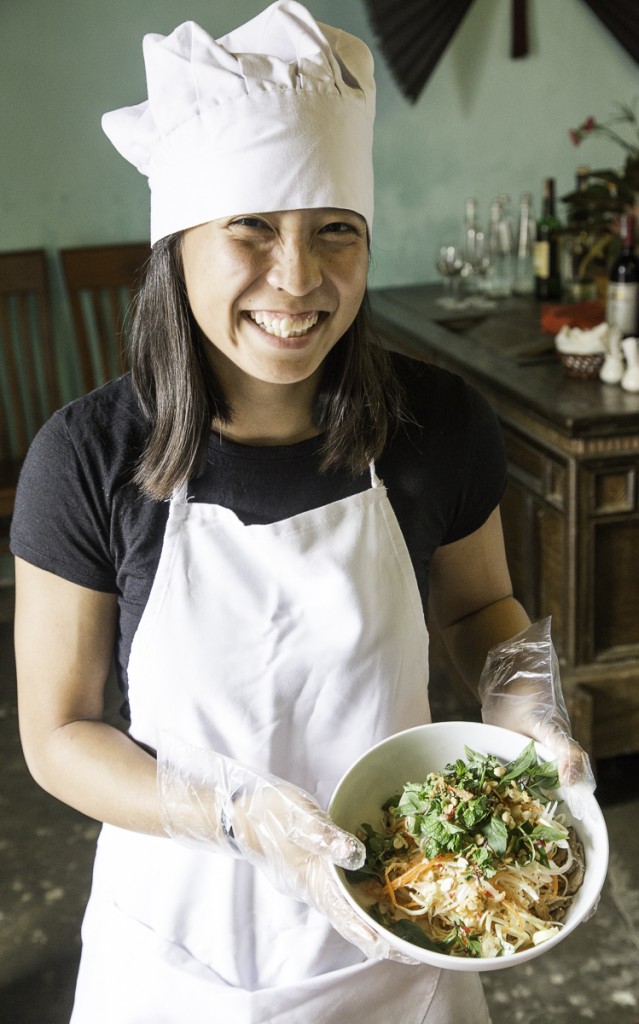 I make that hat look good.

Initially, this seemed like a mistake as it became readily apparent our teacher, Bon, had never taught a class before. The “market tour” consisted of us walking around the stalls, him pointing at something and naming it, and us being like, “Uh, yeah. Cucumber. We know.” After talking a bit more with him, we learned a few unsettling facts: Bon had previously been a chef in Saigon… an ITALIAN chef; he is considering switching to the hotel industry; and his English was not as strong as most of the Vietnamese we had met in Hoi An thus far.

Matt does not have a good poker face, and Bon must have recognized Matt’s displeasure during the “tour” because he asked, “How do you feel?” at one point. Matt, of course, lies and says, “I feel good.” Vietnamese people are incredibly straightforward (no filter) and are always blatantly truthful, so I’m guessing Bon did not realize that Matt was just being polite. We headed back to the restaurant thinking that maybe this cooking class wasn’t the greatest use of our time. 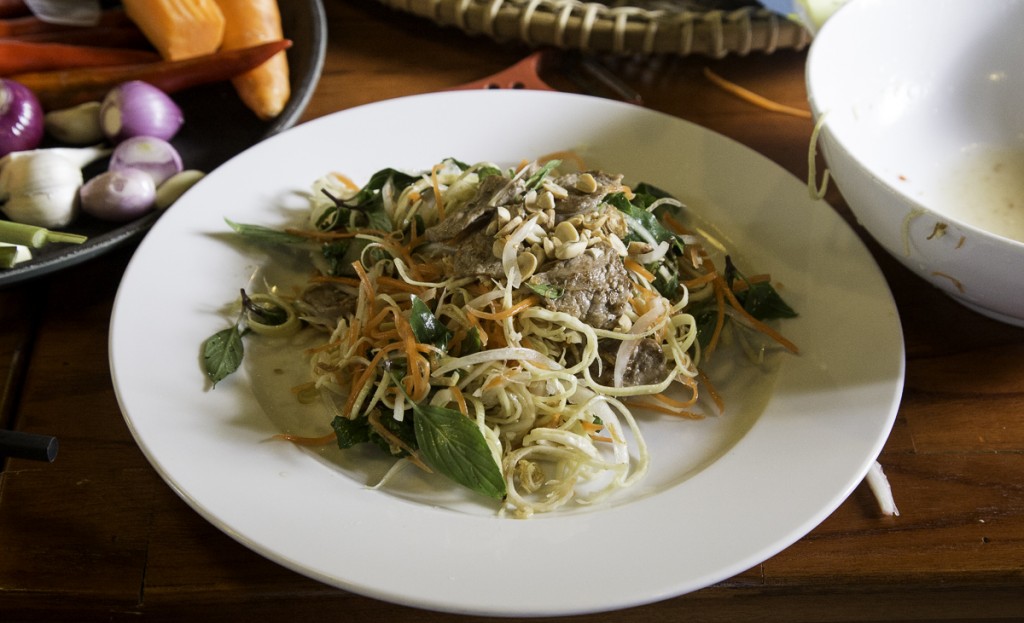 In the end, though, it turned out to be a really fun experience. We learned three different dishes: banana flower salad, banh xeo (Vietnamese pancakes), and pork with lemongrass and chili, and we also learned how to make the chili-garlic fish sauce that is so prevalent in Vietnam. The restaurant manager would occasionally pop in, notice how bad we were at cooking, and give us some tips. And, fortunately, Bon is much more effective at giving cooking instruction than he is at giving market tours. The food turned out delicious, and Matt and I are hoping to replicate these dishes once we get home. 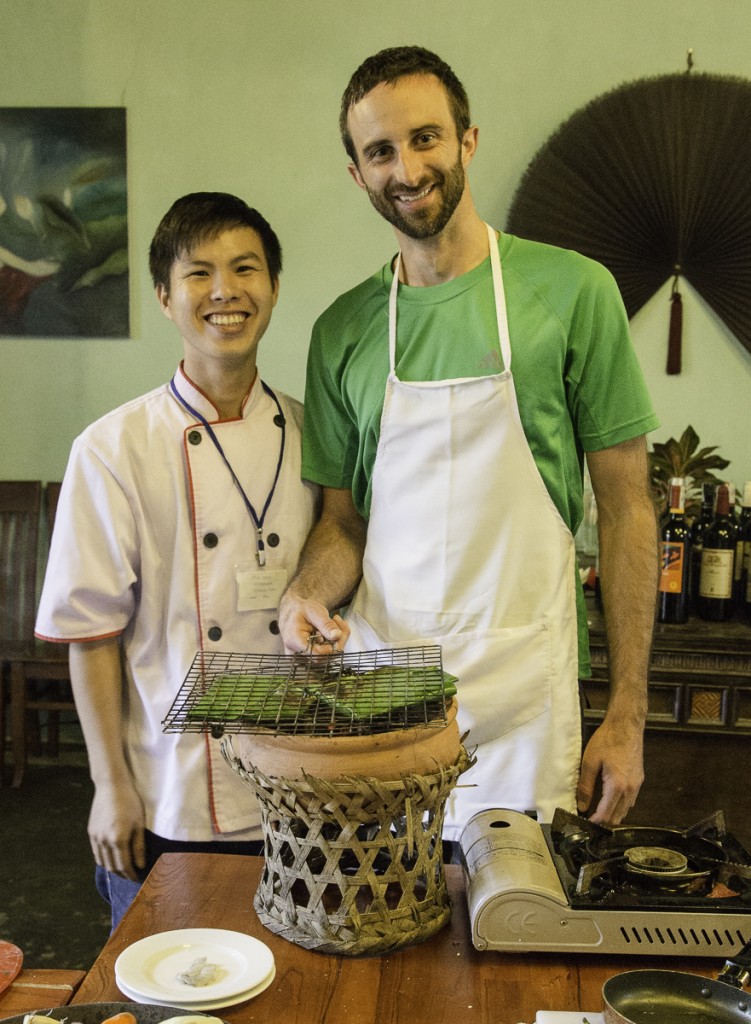 Anyone want to be our guinea pigs? 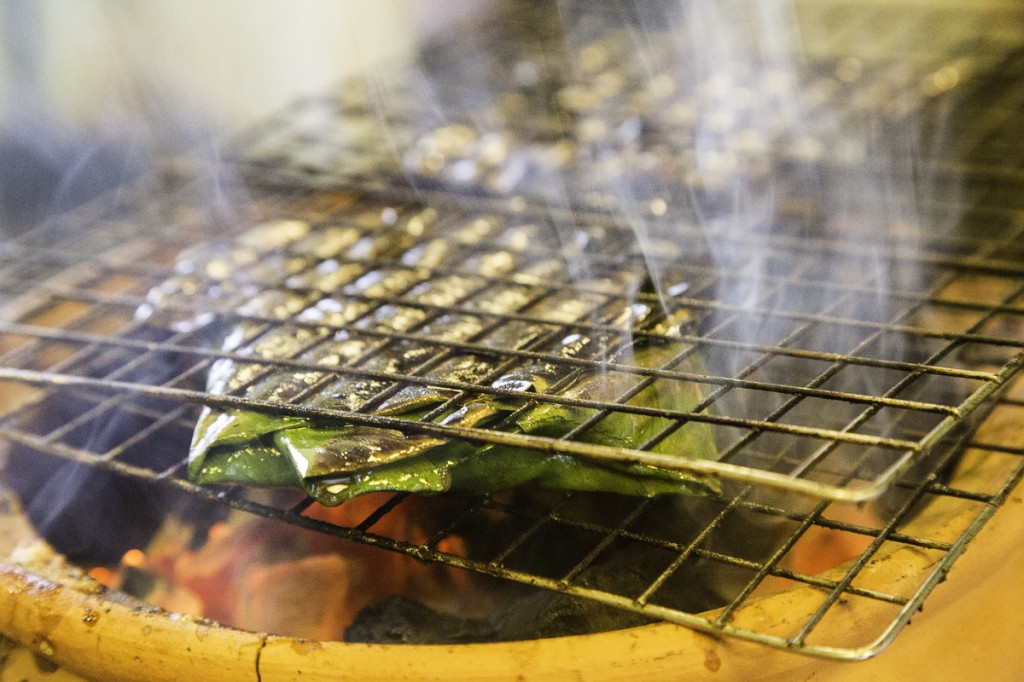 Note: This was a post requested by KK. If you have ideas of posts that you’d like to see from me, let me know. If I can scrape together enough “interesting” thoughts, I’ll write about it!