We were having a rough couple of days in northern Vietnam. We had heard from several sources that Sapa and Lao Cai in the northwest were becoming too touristy, and that’s not really our deal. The same sources told us to go to Ba Be Lake, Ha Giang, and Ban Gioc instead, and so we headed straight north. Initially, everything was great and we had a fun visit to Ba Be Lake where we met awesomely hilarious travelers and saw some cool scenery. 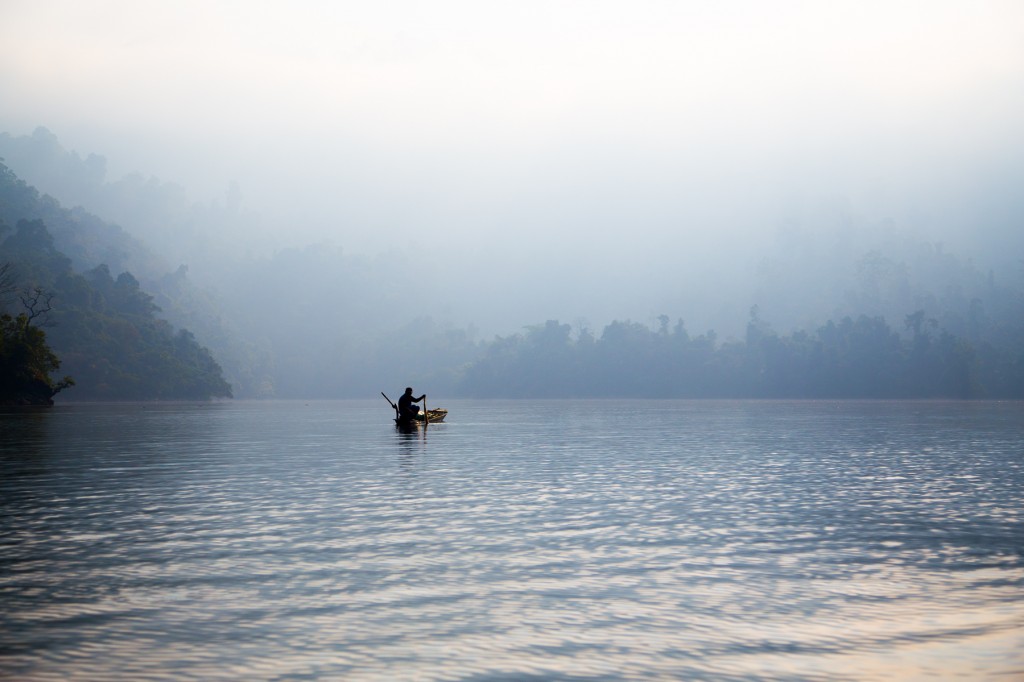 fisherman on Ba Be Lake 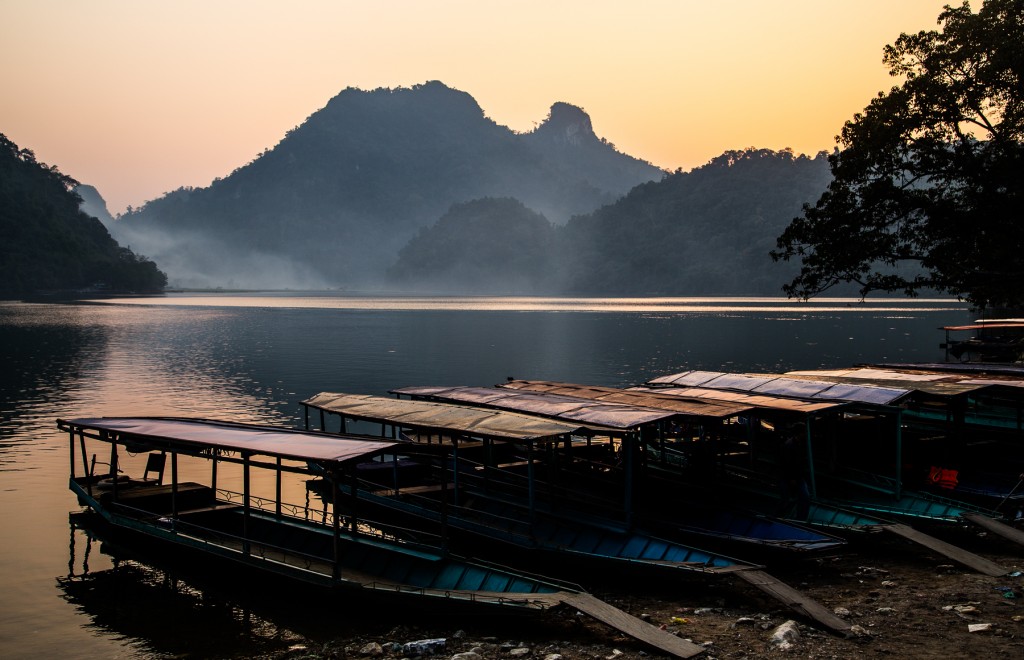 sunset on Ba Be Lake 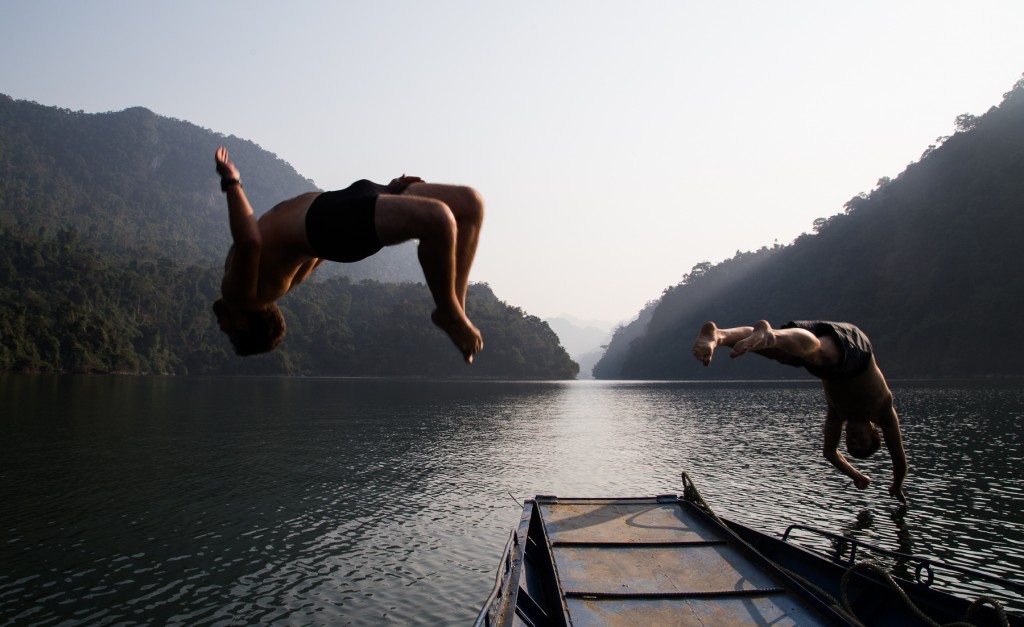 Then, we went further north to Cao Bang and Ban Gioc waterfall, which was also quite pretty. 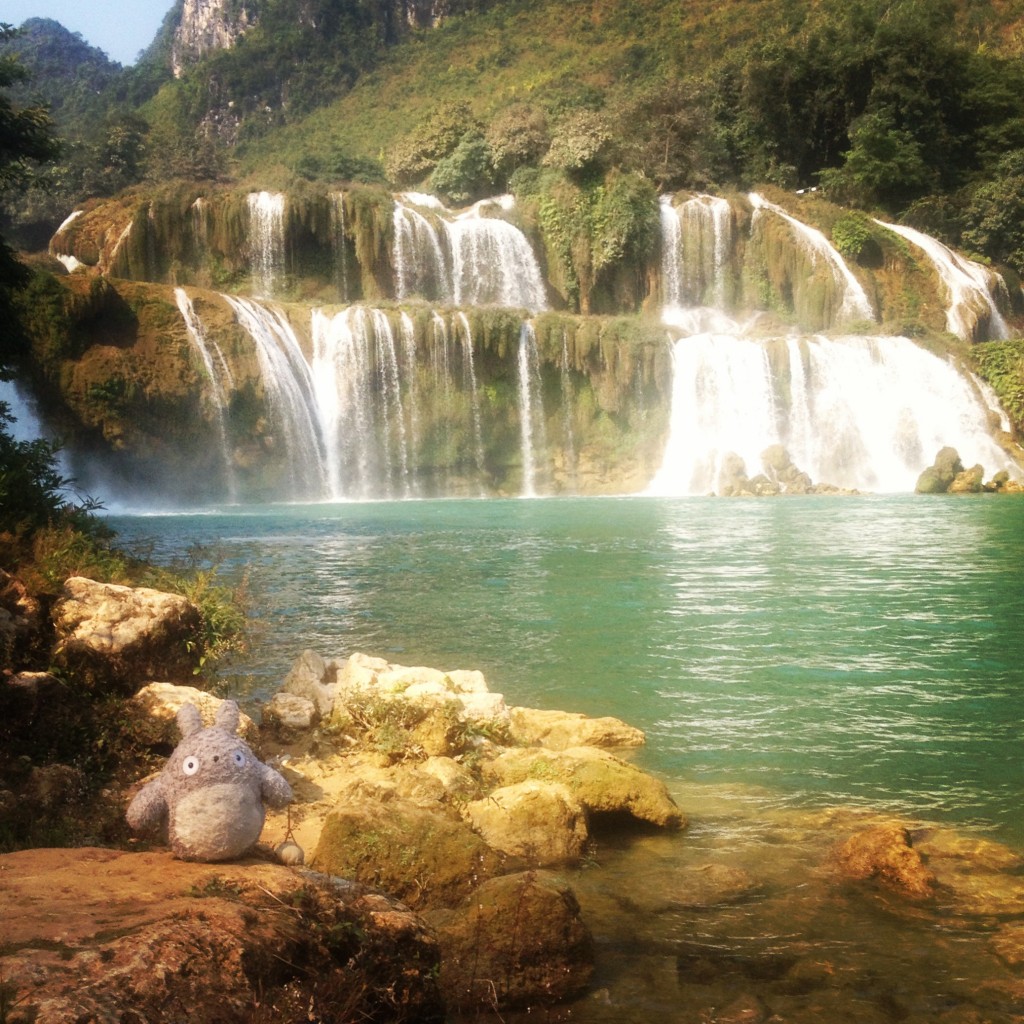 But things went sour as we left for Ha Giang. We tried to make it from Cao Bang to Ha Giang in a single day but failed due to not knowing about an earlier bus and not realizing how long it takes to travel from place to place here due to the winding roads and the nature of our transport (part bus, part courier service). We finally made it to Ha Giang a day (and 11 hours of painful bus riding) later than hoped for, and we headed to Dong Van early (5am departure, 6 hour ride) the next day, hoping to see the Sunday markets where the local ethnic tribes will come sell their wares. However, by the time our bus (which was also transporting motorbikes inside of it…) arrived at 11am, the market was done and everyone was leaving. It seemed as though we were suffering through too many painful bus rides for naught, and we considered packing it up early and going back south to Hanoi earlier than planned. Fortunately, we decided to explore Dong Van for a bit since we were already there.

When I had initially thought of what I wanted to do in Vietnam, I came across several articles suggesting a 10-day motorbike tour of the northwest (including Sapa). Despite the fact that neither of us has driven a motorbike before, I thought this sounded like a great adventure! Even though we didn’t go to the northwest, we kept an eye out for other places we could get on a motorbike.

As we met other people traveling by bike, we tried to gauge the likelihood that we would be able to successfully ride motorbikes in Vietnam given our lack of experience and the crazy traffic we’ve witnessed (always from the safety of a bus). The more we talked to people, the more I lost my nerve and thought that learning to ride a motorbike in Vietnam was a terrible idea. On the other hand, Matt seemed to get more excited at the prospect of a bike tour. We heard that the road from Dong Van to Meo Vac was super scenic and that there was very little traffic on it: perfect for newbie bikers!

As we were in Dong Van, though, our better judgment took hold, and after discussing it with some locals, we talked ourselves out of getting motorbikes. All the bikes were manual transmission which meant we’d have to shift gears along with figuring out balance and accelerating/braking/steering with our hands. And after all the harrowing bus rides we’d taken in the last 3 days, it seemed like a bad idea to start learning on a road with tons of blind and hairpin turns with speeding buses potentially around each corner.

About a quarter mile down the road, though, we had already talked ourselves back into renting bikes. We passed many rental shops which we took to mean that there must have been other tourists who had learned to ride bikes here. And when we asked about price, it was 20,000 VND (just less than $1) per hour! How could we pass that up? At least if we died, we’d have gotten a good price for our trouble. Not fully convinced, I told the guy running the shop that we didn’t know how to drive bikes. He was our last sanity check.

The final sanity check failed. The guy renting us the bikes ignored his friend, the only one of us displaying any good judgment, and he gave us the keys and a brief tutorial on the bikes: front brake, rear brake, shift up, shift down, accelerator. Good to go. Here’s your helmets, give us a credit card so when you inevitably destroy these bikes, we can charge you. Off you go, crazies!

And off we went. On my first attempt at moving, while they were acquainting Matt with his own bike, I sped up a curb and almost took myself out on a tree. Great start!

But renting the bike was seriously the best $5 USD I have ever spent. There was very little traffic on the way to Meo Vac and back (48km round trip). The roads were windy, steep, and in poor condition in lots of places, but we got along just fine. And the views were amazing: 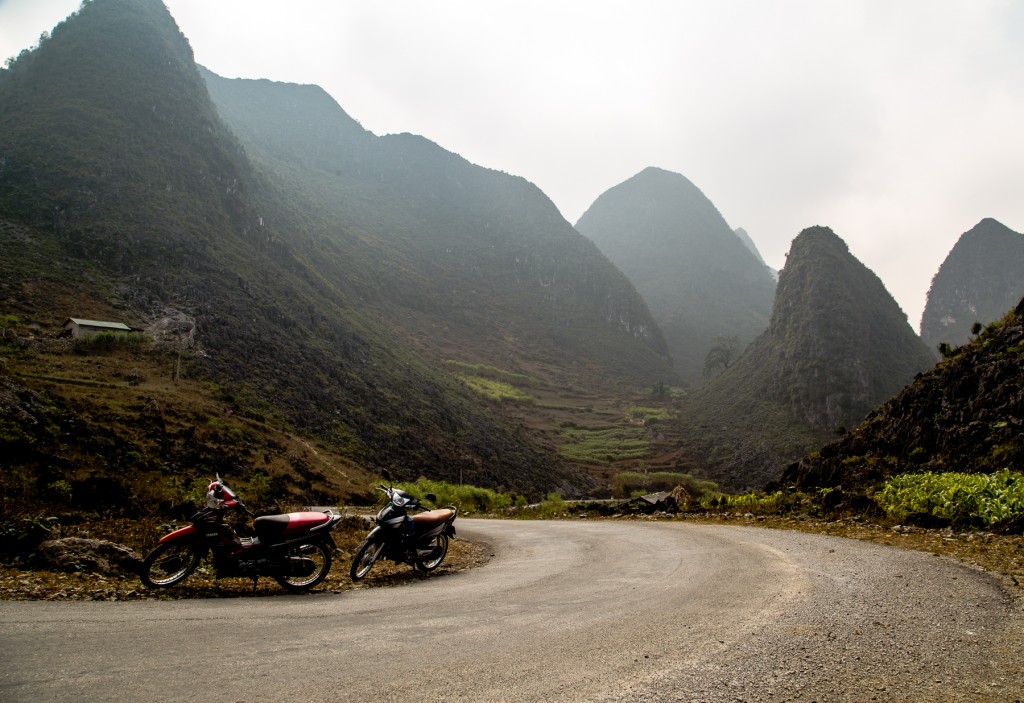 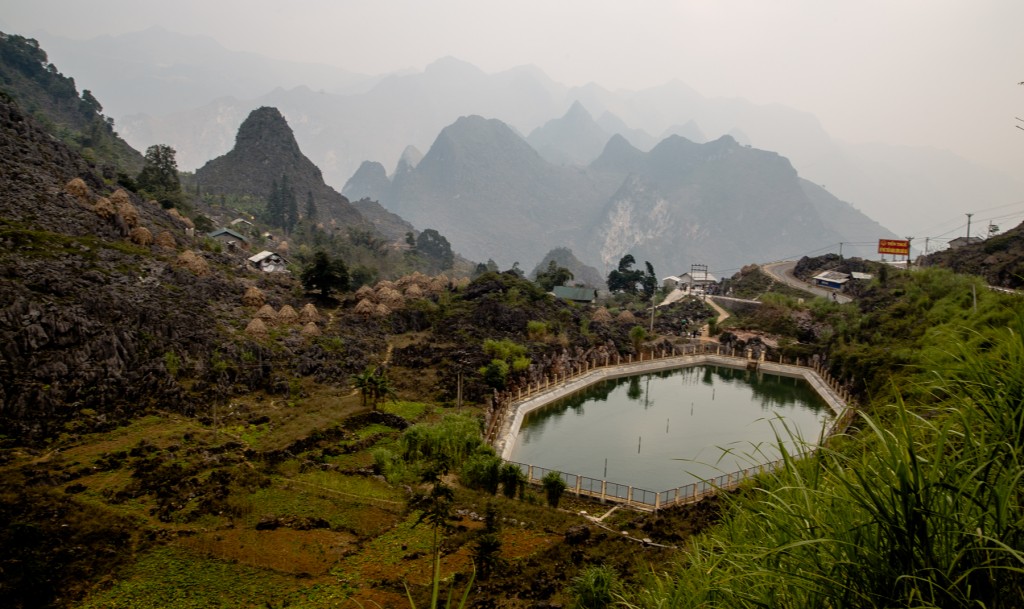 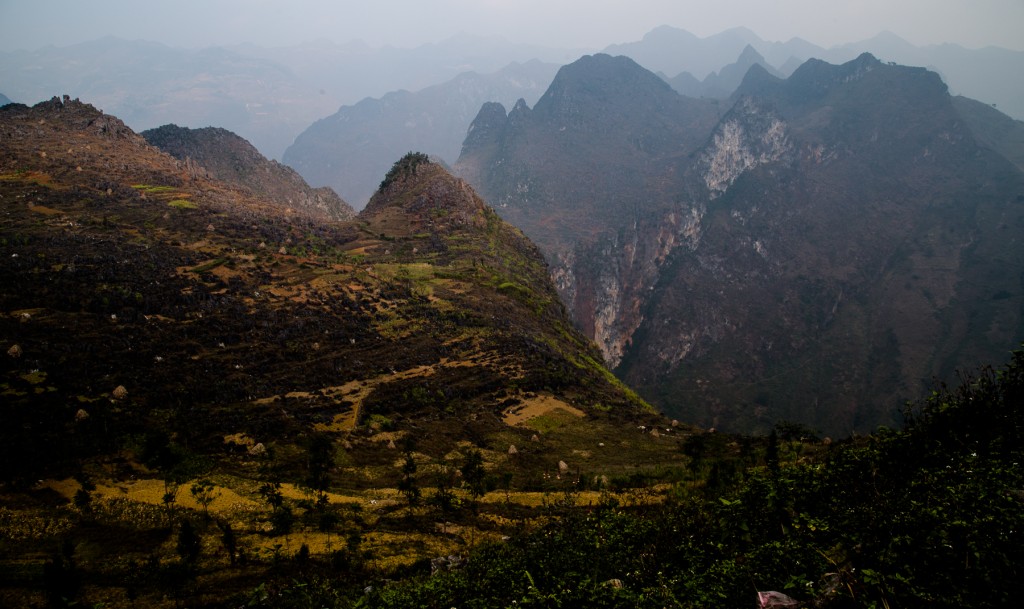 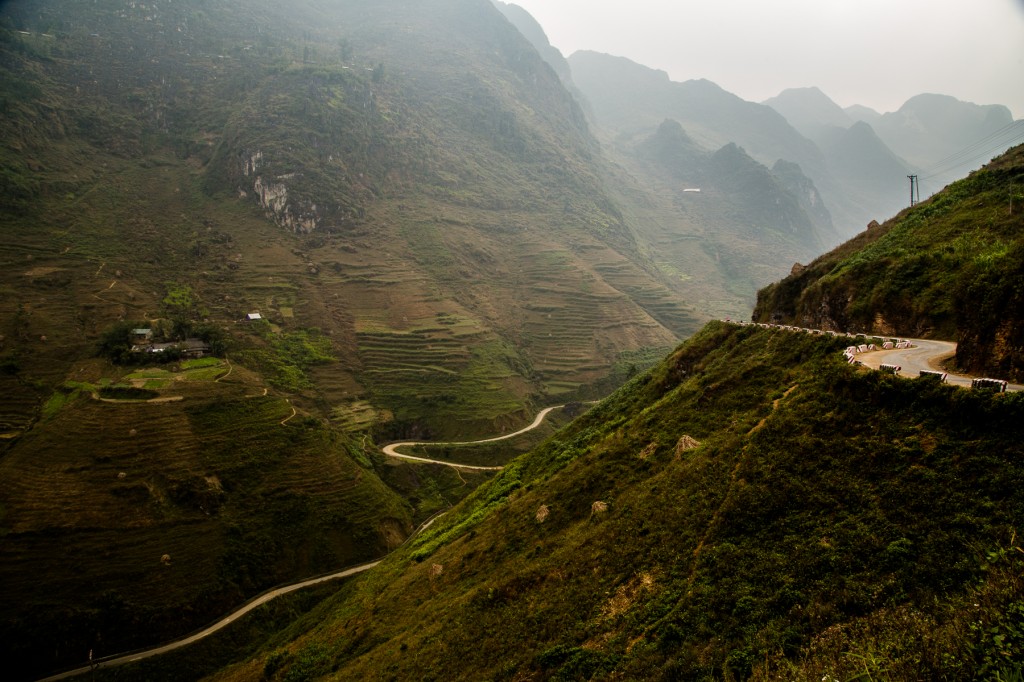 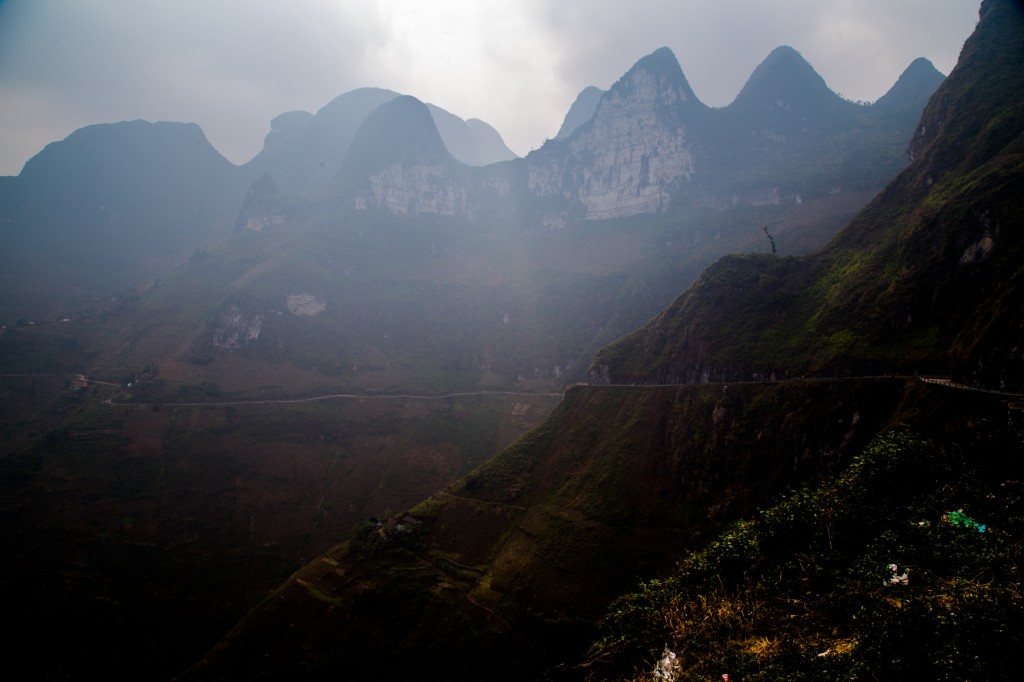 Learning how to ride these bikes wasn’t hard at all. They are built for stability, and as soon as you get moving, they do all the work. Matt and I are both familiar with shifting manual transmission cars, so there wasn’t an issue learning there. The biggest problem for me was getting comfortable leaning into the turns, but we got plenty of practice on this road, and by the time we headed back from Meo Vac, I felt just fine handling tight turns.

I’m so glad that we decided to make the most of where we were even though it wasn’t exactly easy or fun getting to Dong Van. We were moving pretty slowly and stopped often to take pictures, and I took a lot of bugs to the face, but those few hours on the bike is high on my list of experiences in life. After so many interminable hours of riding in packed buses, the freedom of a personal vehicle and being able to stop whenever we wanted to was incredibly liberating. I don’t think I’ll be riding another bike in any sort of real traffic any time soon, but I definitely want to do this again!