nguyen thi soan
I am overly attached to my phone. I had meant to try to use this trip as a way to detach from technology, but I failed miserably at that. My iPhone has proven invaluable, though, and I use it constantly to check maps, track my budget, contact locals, look things up, text Cuz, and, most importantly, Instagram Totey.

One day, we were traveling from Ba Be Lake in northern Vietnam to Cao Bang (cow bahng), another city in a different province. First, we caught a boat across the lake and then jumped on a public bus to Phu Thong (foo tohng). In Phu Thong, we get shoved out of our bus and the people waved their arms in some other direction, which we took to mean, “Away, ye foreigners. That way.” In a British accent, of course.

So, we wander up the road with our huge packs on, getting stares as we so often do. Happily, I greeted everyone with, “Chao ban!” (the standard catch-all greeting). Sometimes people smiled back and waved or said hello, but mostly, we got more stares. Maybe I’m saying it wrong. Maybe it actually means, “sour black acid!” (true story, google translate is not great at Vietnamese and definitely translated some other phrase into this).

After a bit of wandering, it seems like we’ve run out of road, so we stop and try to figure out what to do next. Three ladies walk past us, and I manage to tell them that we want to go to Cao Bang. They tell us that yes, we’re going in the right direction and to just keep going. So, we do, and sure enough, a bus to Cao Bang comes flying by. We flag it down and hop on, happy that we don’t have to walk the 100km.

After about a minute on the bus, though, I realize that my beloved phone is no longer surgically attached to my hand. Nor is it in any of my pockets. I jump up and tell this to the bus at large in English, and everyone on board thinks, “Holy shit, that Vietnamese girl is cray!” They stop the bus to get me to shut up, and after a couple frantic seconds of me gesticulating wildly, Matt points out that the best option is to get off the bus and go back for the phone. So, we grab our bags and jump off, the bus screeches away, and I start sprinting back through Phu Thong, heavy pack and all.

After a little ways, I come upon the three women we had met earlier. They yell at me in Vietnamese, the gist being, “Why didn’t you get on that bus? It was to Cao Bang!” And I try to mime to them that I had made it on to the bus, but I had dropped my phone on the ground. After what seems like a couple futile exchanges, I’m about to leave them be and continue the hunt for my phone when one of the women yells one last thing at me. My Vietnamese is awful, but I can understand more than I can speak. And I definitely heard the phrase for “phone” (điện thoại).  I start doing the universal sign for “phone” (the hang ten hand wiggle by your ear), and she pulls my phone out of her pocket!

I thank her profusely, and she gives me the phone back. As we slowly start walking back up the road with her, she tells literally every single person we pass the story about how we’re trying to go to Cao Bang, got on the bus, but then had to get off and run back because I had dropped my phone.  Every. Single. Person. And people are coming out of their homes and shops just to hear the story and talk about it. She tells the two women she is with, even though they witnessed the entire thing with her! It reminded me so much of my mom and how she repeats every story over and over again, sometimes immediately after she just finished telling the same story.

The people of Phu Thong are loving this. They start yelling out from their houses and fields, “I saw her! She was running so fast!” and “Why doesn’t she speak Vietnamese?” People pull over on their motorbikes to ask her what she’s doing with two foreigners. So, my new friend tells them all the story of how I was on the bus and then lost my phone. Again.

She escorts us to a bus stop because, by now, it is evident to her that we’re hopeless. And she waits with us for the next bus, chattering away in Vietnamese to me. I pick out little bits and pieces and manage to ask her what her name is. She writes it down for me: Nguyen Thi Soan. She makes Matt take a picture of the two of us, but we realize that her phone can’t receive images and she doesn’t have email. I try to get her to write down her address, but a bus pulls up before she can finish, and she hustles us on and tells the bus driver the story. I thank her again and again for her help, and she just tells me, “Di! Di!” Go, little long-lost American daughter. She even texts me later, “did you make it to Cao Bang yet?” in Vietnamese. 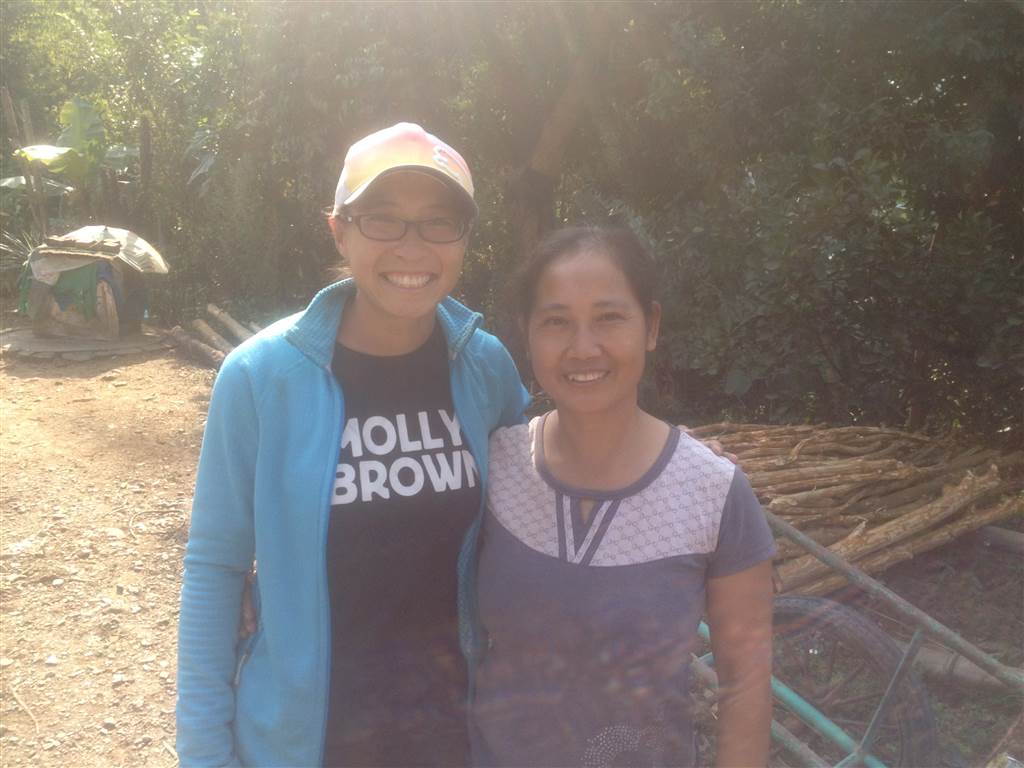 my phone angel in Phu Thong

Thanks to Da, I think I managed to get her mailing address via text, so she will eventually receive this picture.

Earlier that same day, we caught a bus from Ba Be Lake to Phu Thong. As usual, the people on board were confused that the Vietnamese girl doesn’t actually speak Vietnamese. For what seemed like the millionth time in the last 24 hours, I stammered that “I don’t speak Vietnamese” and slouched in my seat dejectedly. In my head, all of the conversations going on around me were about how bad of a person I am. Because I’m that conceited.

These buses also act as courier services, and we make stops all the time for people to get on and off and to grab or drop off packages. So, it wasn’t super unusual when a young guy told the driver to stop and hopped off for a second.

When he came back on, he had a container full of snacks and started handing them out to everyone! I don’t really know what they were, but Matt called them chili-flavored corn puffs which seems about right. Honestly, they weren’t very good, but they did make me smile and cheered me up. I even had seconds.

that fucking hole in the ground
Even as a child, my legs were never pretty. I was always running around and scraping them up, and it seemed like I had some permanent scarring on my knees. As an adult, nothing has changed. I have a lot of scars on my legs from ultimate, including a rather unsightly section on my right shin. I fell on the same spot three times in a single point at the Labor Day tourney, and now it’s a dark patch of skin where hair no longer grows. I’m guessing it’ll fully heal in a few years at which point I will destroy it again, if not before then. I’m a very coordinated person, but for whatever reason, my legs still take a beating.

This trip hasn’t done my legs any favors. Matt even suggested doing a time lapse of them to show how effed up they’re getting, and it’s an amazing idea, but no one needs to see that. Here’s a picture that will have to suffice:

On an almost daily basis, they acquire some new damage. There’s the spot where I cleated myself during the Manila Spirits tournament. There’s scratches from hiking. There’s a nasty cut and bruise I got because I didn’t see a step was missing on some stairs to an old watchtower in Ba Be Lake and slammed my shin into another sharp step. Another bruise is from steps at a homestay where the steps were spaced too close together, and by running up the stairs, I just smashed my shin into the next step. There are tons of bug bites, some of which itch weeks after the bites were first acquired. There are cuts on my toes from when we swam ashore over some rocks to Hidden Beach in El Nido, Philippines. My legs contain a constellation of scars representing all the places we’ve been (and I’ve fallen). I’d rather have just bought some cheap shit from a souvenir shop, but i guess we don’t always get to choose what we take away from a place or experience.

In Cao Bang, a city in northern Vietnam, Matt and I were walking around looking for dinner one evening. It was dark,  but the streets were lit well enough. We were just walking along and talking when I suddenly fell into a massive hole that was in shadow in the sidewalk. The hole was about 6 feet deep, and it seems to have been down to the sewers, and the concrete block that usually covered it was completely missing. Just a giant fucking hole in the ground. And I fell into it. Typical.

As I clung to the edge of the hole, I just hear Matt yelling, “Holy SHIT! What was that?!?! WHAT JUST HAPPENED?!!?” I hauled myself out of the hole and just rolled around on the concrete for a while, a tiny, furious ball of cussing:

It was at this point that I realized Matt is not great at comforting people who are in pain. As I’m spewing out all of the curse words I can think of and rolling around holding my knees, Matt ran over to the hole to see what it is and pointed at some bricks on a wall nearby, “You can sit there.”

Thanks, buddy. Did you happen to notice that I CAN’T WALK?! Anyways.

Matt continues investigating what the fuck just happened and points out how bad it could have been. After a couple more minutes of swearing, I got up and limped onward. Poor fucked up legs. The next day, I looked at the injured area, and it actually wasn’t bad. There wasn’t any swelling (“that’s just muscle”) and very little bruising. A few days later, the kneecap was still a little tender, but there doesn’t seem to have been any permanent damage.

At least until the next time I hurt myself.