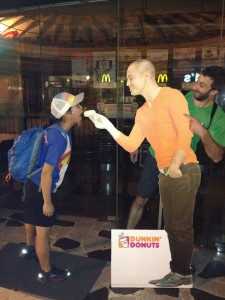 We were told to pose with this cardboard cutout. “It will be funny later,” we were told. He is an ultimate frisbee player and we ran into him at the tournament party.

Soon after landing on Tuesday night, Lester invited us out to play in the first night of their local draft league, and we met him at Fully Booked around 3:00pm the following day. Although we didn’t need to be at the fields until 7:30pm that night, it was important that we get out of Makati City (our hostel’s location) before rush hour. Lester was unable to drive into Makati City that day due to driving restrictions — each vehicle has a certain day of the week where their travel is limited to ease congestion. He warned us if we didn’t get out of there early, it could take forever to get to the fields. Five or six cabs drove off without us when we told them we needed to go to Global City before we finally got a driver willing to take us there. At the coffee shop we also met Ben from Bangkok, a missionary who has lived in Thailand for a few years. As would be the case throughout the weekend, it seemed that everywhere we turned great connections were being made to people and places we would likely visit in the near future.

Upon arriving at Emperador Stadium in Taguig City, we had to wait briefly before taking the field, as the national football (soccer) team of the Philippines was finishing up their practice under the lights on this turf field. Jed, a local ultimate organizer briefed us about the league and sent us to play on separate teams for a game. After the game, about 60 players went out to eat at a local fast food restaurant and bar. Anais encouraged us to try some sisig, which was pretty tasty. My desire to continue eating it changed quickly when I found out it was pig face and ears, and I began to notice the crunchy cartilege texture. 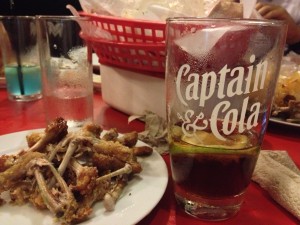 After a day off touring the city, it was time to play the tournament! JC and Mitzie were so awesome — shuttling us to and from the fields each day and encouraging us to try all of the local food and snacks! We were placed into a 16-team A division out of a total of 45+ teams. The competition level in Southeast Asia was much higher than we had anticipated and the ultimate is played very fast with constant give-and-gos. Almost all of our games over the weekend would be decided by only one to three points, and we started on a high note beating Boracay, a team that ended up placing second in the tournament. Expectations that had been raised would soon dampen as we lost our next game on universe point to Shiok from Singapore. Our third game was against a team from Shanghai, Alter Ego, and Amy Smith was playing with them. It was great to run into one of our Denver friends. She is now living in China after spending a year in South America and we already expect to run into her again in about a month in Vietnam.

The players are very spirited and after every game the teams form a spirit circle and one player from each team talks about the game, complimenting the other team, and shouting three-cheers of hip-hip-hooray each time. Manila Spirits was also the most professionally run ultimate tournament I have played in. Each field had a game disc and two assistants assigned to it, who kept time, score and statistics. Everything ran on time with loud signals alerting players when the rounds were approaching their ends. I can see why this tournament is a magnet for players in the region, and the excellent Saturday night party, where you can get bottle service for under $10 USD, didn’t hurt! Thanks to Lester for hosting the pre-party costume making at his place, Jeffrey for getting supplies to start the party early and Ysa for washing our white jerseys for Sunday!

Lisa and I had been sticking to our travel budget fairly well for the first few days in Manila. There are not a lot of tourist highlights in the sprawling city where traffic can have you bumper-to-bumper for hours at a time. However, our costs quickly skyrocketed during the tournament weekend. Entry fees, team jerseys, and merchandise tents all added to costs of almost $100 a day, about two and a half times our daily budget. I know we will make it up in other areas, and costs will fluctuate, but it was a bit of a shock!

In addition, while I only left with four short-sleeved shirts for the entire year, I added four additional jerseys just from this tournament! Southeast Asia is the land of sublimated jerseys — almost all teams have them and they come super cheap. I traded some of my existing jerseys for some really awesome jerseys I found at the tournament. In addition to our Sid Vicious team jerseys, I swapped my extra firefighter jersey from Hawaii for an Illini jersey (my alma mater) and executed a three-way trade for a Vudoo jersey from last year’s Manila Spirits. Thanks to Franco for giving up one of his Vudoo jerseys — I’m excited to wear it! Included in our players pack was a disc, hat, stickers and tournament tank top, which was much needed as I was unprepared for the heat and humidity here! With all of this new clothing, I think a shipment home may be needed sooner than expected.

One thought on “Manila Ultimate Recap”