everything is changing rapidly
We have a rip-off Lonely Planet guide book for Myanmar, and we’re not sure what year it is from. I’m guessing it is the 2011 version because of references to 2010, and it is already horribly out-of-date. Much of the information in it is completely off in today’s Myanmar. Examples:

I’m not sure why there’s so much incorrect information out there, but I think it is partially due to how fast things are changing in Myanmar. Since the government opened up the borders, more and more tourists have been visiting and reporting back how amazing this country is, and the country is reacting very quickly to the new influx of money.

the people
The people of Myanmar (Burmese? Myanmarese? Myanmarites? I don’t know the appropriate phrase) are incredibly friendly and helpful. They are very curious about foreigners, and we have so many people smiling and greeting us. Many people will just shout, “Hello!” and “Where are you from?” And unlike in many other places we’ve been, they actually just want to get to know us and not sell us anything (though there is some of that, too).

When we tell people we’re from America, we hear one of the following phrases, in order of most common to least common:

I don’t know where they got these phrases, but I love it. Matt is quite the attraction, and whole truckloads of passengers will stare at him: 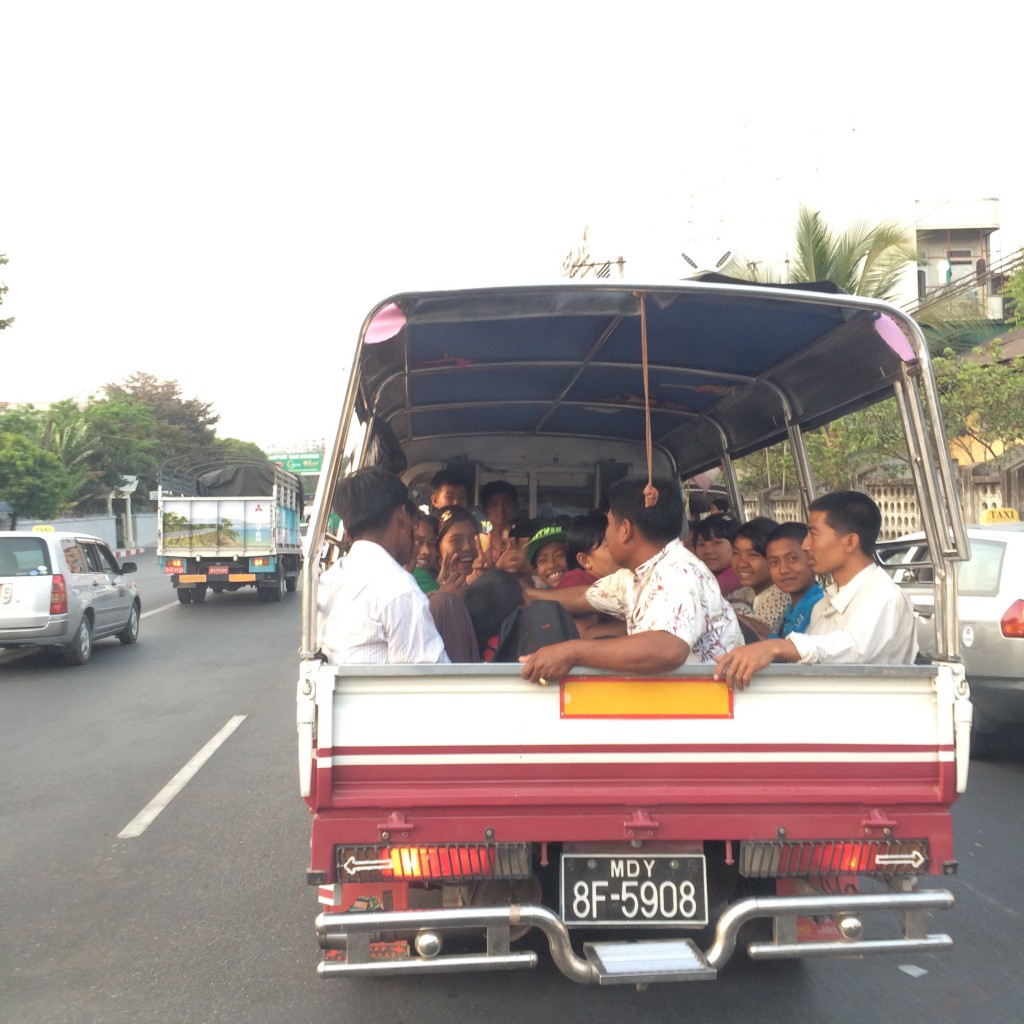 This got a little awkward after a minute. We were stuck in traffic directly behind this pickup for a good 10 minutes, and so Matt endured about 9 minutes and 30 seconds of extraneous waving and staring. But look how happy and friendly they are!

One day, we were looking for U Bein bridge in Mandalay, and our ride (an insanely full pickup truck, like in the photo above but worse) had dropped us off pretty far from the destination. We had no idea where to go, but as soon as people saw us they immediately started pointing us in the right direction. “Hello! U Bein, this way please!”

I was cruising along down a road on my e-bike in Bagan when a pickup passed me, and all the passengers stared at me. I shouted, “Mingalaba!” (hello) through the dust and noise, and they all broke into huge smiles and shouted “Mingalabaaaaaaaaa!” back at me.

off the beaten path
Angkor Wat and the Angkor Archaeological area in Cambodia was pretty touristy, but it still felt like you could do anything you wanted. You can climb on many of the different ruins, and it’s generally pretty lawless. There aren’t any guards or stewards making sure that the dumb tourist doesn’t fall four stories off an old temple. Mostly, there were occasional fences or gates keeping people off of certain areas.

Myanmar is even more extreme in this regard; there is very little infrastructure to control tourists. In Bagan, there are over 4000 religious structures like stupas, temples, ordination halls, etc. in varying stages of decay (they are approximately 800 years old). While some of these are locked up, the vast majority of them can be climbed on / wandered through / whatever strikes your fancy. When we climbed up a stupa for sunrise one morning, we noticed some other tourists sleeping up on the highest ledge! We may have scaled up onto a couple sketchy cornices ourselves.

There is a $15 fee to visit the Bagan Archaeological area (or whatever it’s officially called), but we could have easily avoided paying this fee by not going to the most popular sites at peak times. Tourism is still so undeveloped in Myanmar that anything goes, and you can get around many of the restrictions. We haven’t seen very many tourists in Myanmar, and this actually meets our expectations. Also, we are here in the hottest part of the year (106 degrees is the forecast for the next week…), so it is the low season for tourism.

internet
Myanmar has the worst internet access of all the places we’ve been to. Despite this, very many people here seem to have smartphones. Matt did some research, and the phone networks are supposedly very bad, but they’re about to improve dramatically as a new company comes online in July.

food
We were told to not expect much from Burmese food, but we’ve actually found it to be pretty good. Maybe we just didn’t like what we had in Laos / Cambodia / Philippines, but we’ve been eating pretty good here. This may also be because we’ve mostly focused on eating Indian food (there’s a decent-sized Indian population in Myanmar), but the Burmese food I’ve had so far has been tasty.

heat
My motorbike driver in Mandalay told me that there are three seasons here: hot, hotter, and hottest. Guess which one we’re in.  Myanmar is the absolute hottest place we’ve been with temperatures well over 100 every day. It’s so hot and dusty here that we’ve been getting up early to do things before hiding out in our air-conditioned room in the middle of the day and then re-emerging at night.

Now that we’re at a higher altitude in Pyin Oo Lwin, it’s a little cooler, so like 90 degrees. >_<

amazing
Yangon and Mandalay are big Southeast Asian cities. Sure, they each have their own flavor, and I like both of them, but they’re not especially note-worthy. But Bagan is truly amazing. It is famous for the thousands of stupas and temples that are scattered across the plain. I’ll have to write up a separate post on this, but here is a sample of what we saw: 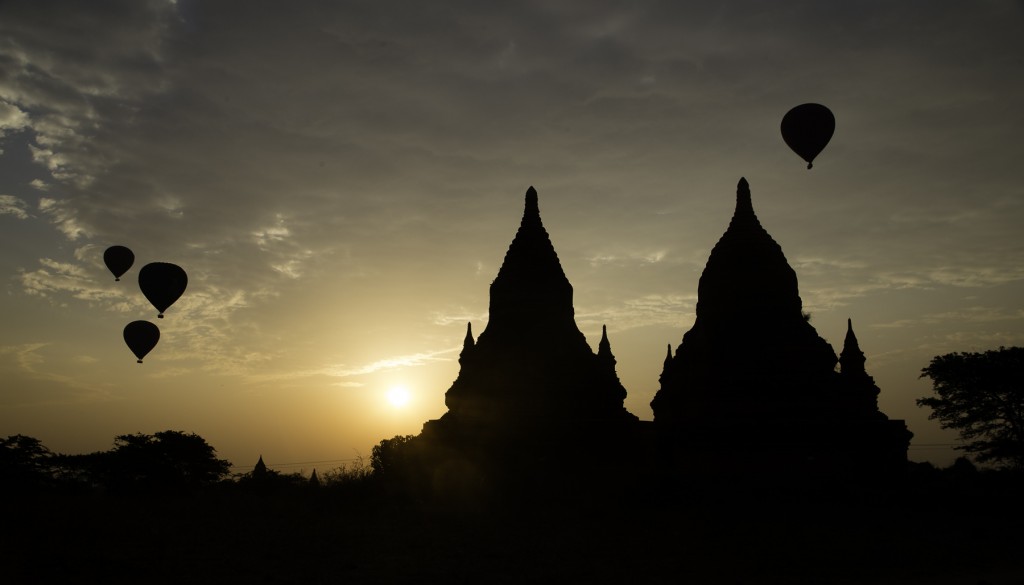 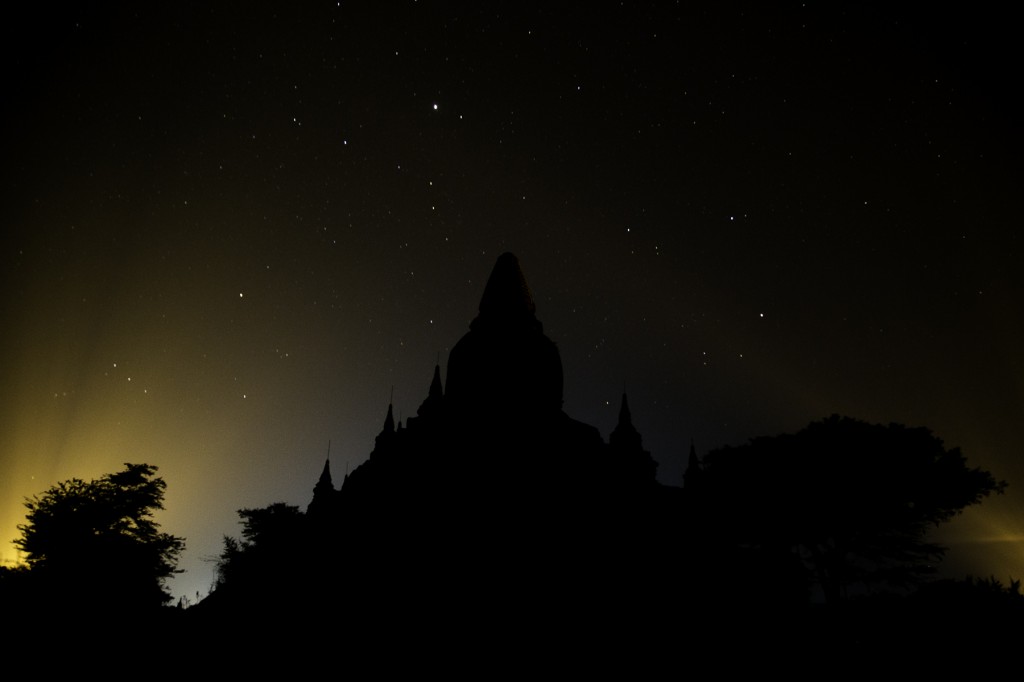 stars over a stupa in Bagan

random notes
Every country has it’s own quirks, and Myanmar certainly has its fair share.

Summary: We are loving Myanmar so far!