After playing the Big Phat Phnom Penh Hat ultimate tournament, I had three days before I needed to be in Bangkok to catch a flight to Boracay for yet another tournament. Two days would be filled with bus rides, which always take longer than expected in Cambodia, and the middle day would be spent in and around Siem Reap, seeing the many ruins of Angkor Wat, Baphuon, Bayon, and Ta Prohm. Lisa had rented a tuk-tuk for the day and managed to hit both sunrise and sunset at Angkor Wat, filling the rest of the day with additional ruins along the big and small loops. I knew that I would probably burn out faster on temple sight-seeing and instead opted to rent a bicycle in town and go at my own pace.

Water buffalo, rivers, buddha statues, and dusty roads… all in one shot; not staged. 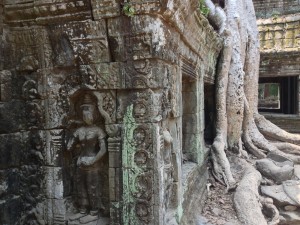 The jungle’s attempt to reclaim its land.

I planned to visit Ta Prohm, Bayon and Angkor Wat, and had mapped out a loop that would save me from biking the same busy road twice. I rented my bicycle and headed out on the journey that would take me about fourteen kilometers north of Siem Reap to my starting point of Ta Prohm. This is one of the more overgrown of the nearby ruins, although most of the jungle is cut back. What remains are very large trees that have grown atop the ruins, draping their roots across the stone. As I neared the complex, there was a police checkpoint and they waved me over. I hadn’t bought my ticket yet, but no problem, I would just purchase it now. 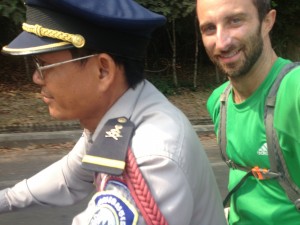 selfie on back of police motorbike escort.

Unfortunately, however, that was not possible as this was only a checkpoint and I would need to backtrack a round trip of fourteen kilometers to purchase my one-day pass. After a couple minutes of not being pleased with this fact, they offered to let me leave my bicycle at the checkpoint and find me a ride to get my ticket for a round-trip cost of $3. This sounded much better than wasting half my day in the heat, so I quickly agreed. Turns out that finding a ride for me meant I was hopping on the back of a police motorbike.

Twenty minutes later, I was back at the checkpoint where two more cyclists were discovering they couldn’t purchase tickets at this location. I think we were all relieved to see each other: them now convinced it wasn’t a scam, and me happy I wasn’t the only idiot to arrive without a ticket. I stopped at a couple random temples along the way to Ta Prohm, then spent about an hour wandering around the Ta Prohm complex and the countryside within the walled city. After that, I headed towards Bayon. Instead, I ended up near Baphuon (unknowingly) and decided to bring my bicycle into the complex this time. I was the only one cycling around inside and that was pretty fun. I rode along lakes and by temple complexes and after climbing to the top of Baphuon and taking a GoPro timelapse, decided to stage my first item of the day. I saw a long, elevated walkway and decided it would be fun to ride along it. So I setup the camera, awkwardly hoisted my bicycle up onto the walkway and waited for a break in the tourists:

Cycling along the elevated walkway entrance to Baphuon

That was a fun and relaxing diversion, but now it was time to cycle a few hundred yards further to the actual complex of Bayon. This temple is filled with many spires that each have 4 Buddha faces pointed outwards. I would run into Corrine here, the third ultimate frisbee player of the day. Lisa and I weren’t the only ones with the idea of heading to Siem Reap after the tournament. I grabbed another GoPro timelapse and then decided it was time to visit Angkor Wat before I completely burned out on sightseeing. It turned out that bicycling was definitely a great way for me to see the area. It gave me the freedom to go when and where I wanted, and was a nice adventure that broke up the endless ruin gazing. I only wish I had spent a little more and gotten one of the really nice mountain bikes that a couple other travelers had, and not the fixed-gear ride I ended up with.

Time-lapse photography of Baphuon and Bayon

As I neared Angkor Wat on my bicycle, it was clear that this was the main tourist destination for all of Siem Reap. Hundreds of people were walking on the bridge over the moat, but all I was really focused on was the fact that I finally had found a vendor selling fresh sugar cane! In Laos I had been on a killer minivan ride from Pak Lay to Vientiane when one of my fellow seat-mates offered me a piece. I didn’t come across it again in Laos, but once I hit Cambodia, I had been buying it wherever I found it. For fifty cents I got a bag full of sliced up, chilled sugar cane as well as a second bag to spit out the leftover bits when I was done juicing it with my teeth. *kharrrunsshh* (that’s the awesome sound it makes when you eat it). Anyway, I had been looking for it all day as I biked in the heat. On my way into Angkor I was eating it as several teenagers turned, laughed and then discussed amongst themselves about my food choice. I offered to share some and they refused. I asked if they didn’t like it, and one girl said she did in fact like it, but didn’t eat it. Okaaaaay. This would be one of at least three times on the trip when I got unusual attention for eating sugar cane. No further clarification was forthcoming from the teenagers, and I still don’t know what that’s about, even after googling for the answer.

I’m not sure exactly what I expected from Angkor Wat, but it turned out to be less impressive than I had imagined. A university group from Tokyo was there performing a 3D map of the complex, floating their hardware above the ruins with a large balloon. I did find a couple areas tucked away in the complex where I managed to be all alone — long enough to come up with my new GoPro time-lapse amusement: staging photos that I appear in multiple times! You may have to click to larger versions of these to actually see: 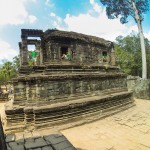 I headed back to Siem Reap on my bicycle around 3:30pm, finally tired out from all of the biking and ruin-climbing. The ride back was along a much busier street, but after a while in Southeast Asia, you just learn to trust (or hope) that the traffic behind you is doing a good job of paying attention. It’s not like The White Bicycle I rented came with the option of a helmet. After dropping off the bicycle, I walked through the Siem Reap market and back towards my hostel where I got taken by a scam I hadn’t yet encountered in life. Quite a day!