We arrived in Chiang Mai, Thailand with about five days to spare before the ultimate frisbee hat tournament. So we headed further Northwest to Pai, a small town along the Mae Hong Son loop that is known for it’s hippy atmosphere. I had read about a two-day rafting trip, and after many helpful emails back and forth with with Guy, the French man who has been running Thai Adventure Rafting for over 20 years, I decided to sign up. It’s currently the dry season in Thailand and there was only about one week left in the rafting season. The water levels would be low, but it sounded like a fun way to get to Mae Hong Son where Lisa was going to be hanging out for a couple days.

This rafting trip seems much more exciting when set to an absurd soundtrack!

There were seven people on the trip, two of whom I had met at the Pai Circus School where we stayed the night before. I got paired up with a German father and son duo, who loved to sing, whistle and harmonize throughout the entire ride, and our raft guide Mai. He had answered a help-wanted sign 18 years ago when Guy was looking for locals who could swim and were interested in learning to guide a whitewater raft. He has been doing this ever since.

Because the water levels were low, it would take us five to six hours each day, as opposed to the three during the wet season, when the river would rise six to ten feet above the current levels and include class four and five rapids, rather than the class two to three I would experience. It also meant that rather than a relaxing float trip, we would be paddling at least half the time. 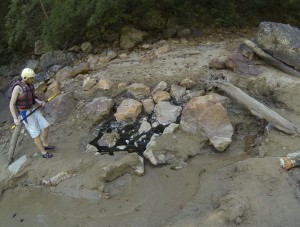 After a short break for lunch, we ran into another group of rafters at the waterfall stop. This was surprising, as we had expected to be the only ones on the river for the day. It turned out to be a group of whitewater guides from California who had rented a raft and were going it alone (along with a local canoe guide). They had no sleeping arrangements and were hoping to crash our rustic jungle camp, which could accommodate over fifty people with mats, sleeping bags and mosquito nets.

The wildlife highlight of the trip came on the second day when I saw about fifty green parrots flying and playing in the jungle canopy. We also stopped at a hot springs along the river where we dug out some pools in the sandy bank and warmed up during lunch. No one wanted to leave, but we still had several hours of paddling ahead of us to reach Mae Hong Son before sunset.