Shortly after I wrote the last post, I made the sudden decision to go off on my own to a Buddhist forest monastery near Mae Hong Son in northern Thailand. I’m still processing my feelings on the week I spent there, but I’m short on time and wanted to get a post up since there hasn’t been one in a bit, and it’d be too long to explain the logistics as well as my emotions in a single post. I’ll organize my thoughts soon, but this post is about the basic routine and structure of my week at Pa Wat Tam Wua Forest Monastery. 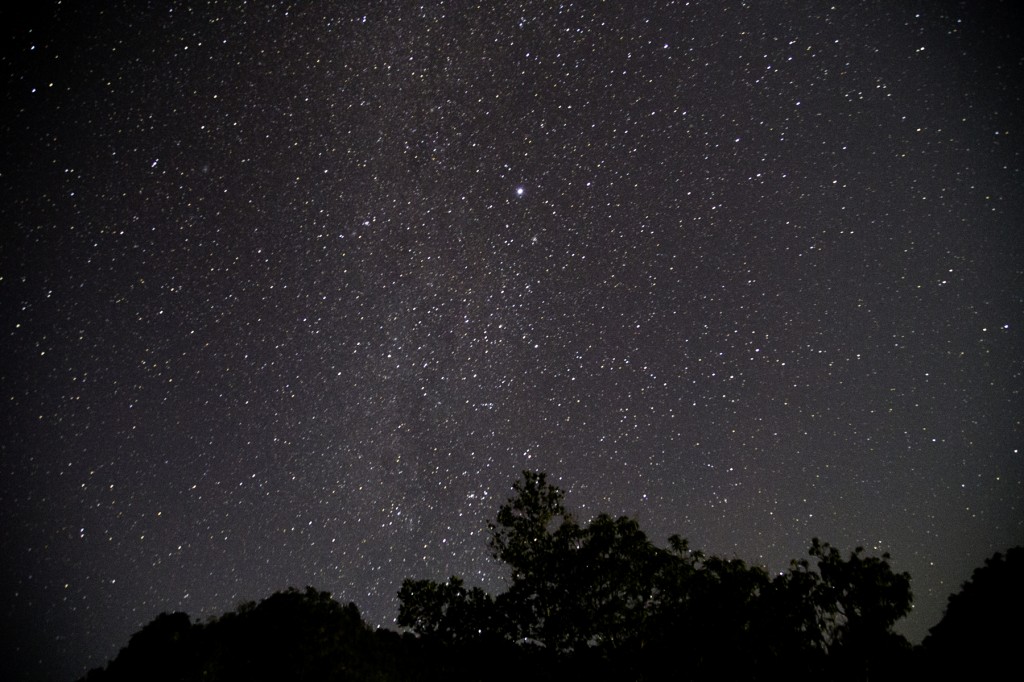 the milky way! i’ve been trying for this shot for months

Daily routine
This is the schedule followed by meditation students.

5:00: wake up and meditate by self in kuti (not once did I even attempt this)
6:30: go help prepare breakfast in the kitchen
7:00: offer alms to monks and receive blessing for breakfast, and then eat breakfast.
8:00 morning meditation: short talk, walking, sitting and lying down meditation. Usually ended around 10.
10:30: offer food to monks, receive their blessing, and have lunch
11:00: Lunch. No eating after noon. Afterwards, free time. I used this time to shower since I only had cold water in my kuti. Then I would wander around and bask in the sun somewhere on the grounds until…
1:00: afternoon meditation. Same as the morning.
3:00: free time
4:00: “chores” like chopping up fruit rinds to feed to the fish in the ponds
5:00: free time, coffee/tea
“6:00″: Usually didn’t start until 6:20 or 6:30. Evening chanting and meditation.
8:00: meditate alone in kuti. I attempted this once and straight up passed out. Later, I would use this time to read or take photos of the stars.
10: Sleep

the place
Pa Wat Tam Wua forest monastery is 35km from Mae Hong Son in a little valley set between three limestone mountains. It’s a gorgeous, peaceful setting: two ponds filled with huge fish, 38 kutis separated by gender (can sleep 300; one dorm for 100, two dorms that fit 50, and then 30ish little kutis that sleeps one person each but can fit up to three each if necessary), two gurgling streams, a couple gardens, beautiful blossoming trees, well-manicured grounds, and short hikes up into the mountains for meditation caves. Even with fifty students and another twenty staff and monks on the grounds, it was easy to find beautiful empty spaces where I could just sit and feel like there wasn’t anyone for miles around. 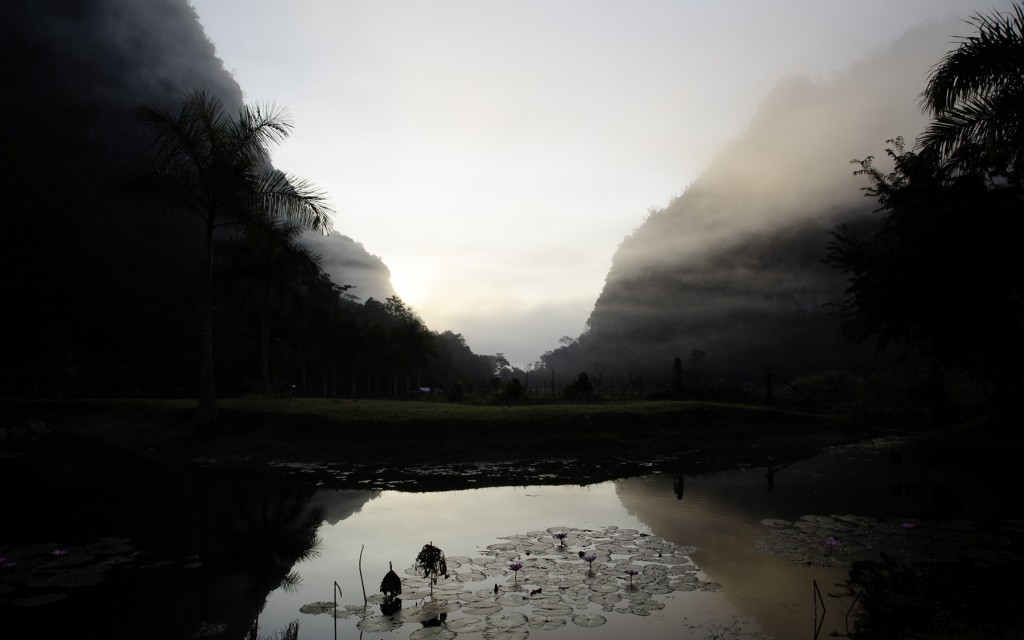 A kuti is a small wooden room built up on stilts with an attached bathroom. Most of them seemed to have hot water, but I wasn’t so lucky. It seems that they try to put as many people in individual kutis as they can, and then they start to put people in the dorms, if necessary. 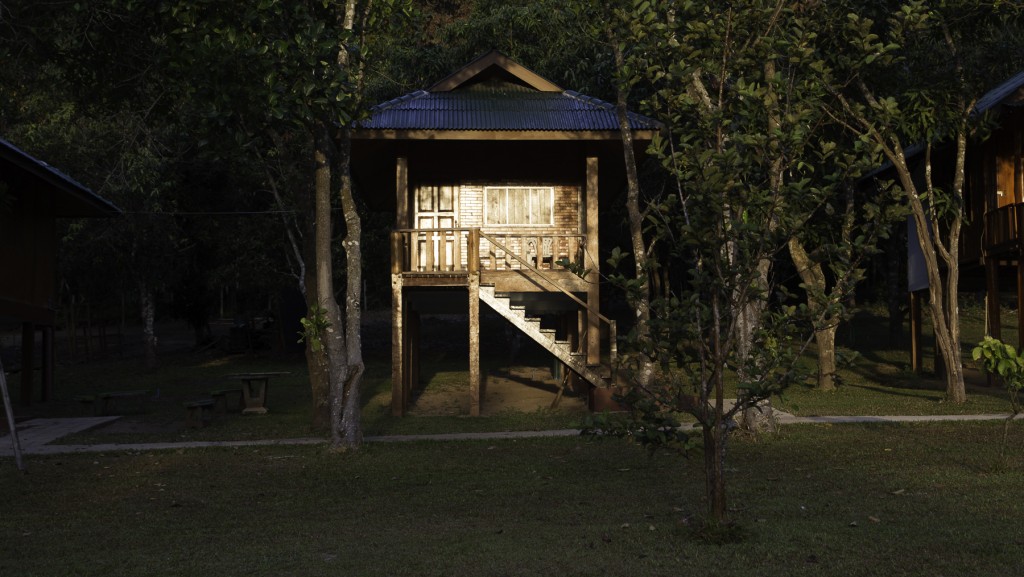 A Kuti is a small structure, built on stilts, designed to house a monk. Its proper size is defined in the Sanghathisep, Rule 6, to be 12 by 7 Keub (or 4.013 by 2.343 meters). This tiny footprint is intended to aid the monk’s spiritual journey by discouraging the accumulation of material goods.

Inside the kuti, there was only a small wooden table. And by “table” I mean “bed.” Seriously, I thought I had slept on hard mattresses in Asia, but the bed was really just a short wooden platform that they put a bamboo mat on top of. There was a thin cushion that doubled as a meditation mat that you could spread out on the wood as a mattress, but it may as well have not been there. Despite this, I had some of the best sleep of this whole trip on that table.

the food
We ate amazing vegan food for breakfast and lunch but no dinner (supposedly not having dinner helps with digestion and focus…? I’m not sold).  Surprisingly, I wasn’t ever too hungry after lunch. I’m still not sure how that happened since I normally have the appetite (and discerning taste) of a garbage disposal, but maybe I was subconsciously stocking up at breakfast and lunch so that I wouldn’t be starving in the evening. It could also be that we weren’t very active during the day, so we didn’t need as much food as we normally would consume. This marks the longest I have ever been vegetarian, and it has shown me that it’s possible. But I definitely ate the first steak I could get my hands on immediately after leaving the monastery.

the rules
Complete silence is not the norm, but they do ask people to refrain from being loud so as to not disturb other meditators. Some people chose to wear “silent” badges for parts of their stays, but it wasn’t required. I spent my first three days being mostly silent because I had primarily come to be alone, and I saw the silence thing as a challenge. It wasn’t particularly difficult for me, and I ended my silence when I saw no further point in it. I found the silent badges unnecessary as it was easy to keep to myself and find areas where I could be solitary if I wanted to.

The rules also stated: no technology, no music, clean your dishes, clean your clothes and kuti, do community chores, genders are strictly separated in the kutis, modest dress (everyone wears white monastery clothes, provided if needed), no yoga in public areas (the monks work hard to  not be distracted by women), and led meditation classes must be attended or the student must tell the abbot or teacher in advance of their absence.

The monastery was definitely not strict. It was up to each person how closely they wanted to follow the rules, and it was purely on the honor system. The monks frowned at people taking photos during class, but I never saw someone being reprimanded. It seemed like the main rule people broke was no technology, and I’m rather proud that I was able to mostly put aside my devices without much stress. My camera was the only exception, but I wasn’t nearly as bad as I could have been or as some other students were.

The biggest appeal of this retreat for me was the chance to disconnect. I love you all, but damn it, sometimes I just need to be alone. And that meant no Facebook, no access to the internet or data (turns out there is full 3G coverage at the retreat, but I didn’t even check until I left), no hat tournament in Chiang Mai, and no watching the Broncos in the Super Bowl (my god, what happened?! It’s for the best that I didn’t witness that). I chose a hell of a week to go offline!

The whole point of the retreat is to remove as many distractions as possible to better practice mindfulness. Just as we must learn to crawl before we walk, it’s easier to meditate in a serene and peaceful setting before attempting it in the chaos that is our lives. The retreat provides the place and structure to focus on cleansing our minds.

the cost
Staying at the monastery is “free,” but donations are expected. People are asked to give what they think the stay is worth or as much as they can. At the very least, they expect people to donate enough to cover the cost of food and lodging. Most temples in Thailand run on donations, and this place seemed to be doing pretty well.

who can go
Anyone is allowed to come whenever (no reservations), and I just rolled up on a motorbike one day. You ask the abbot for permission to stay, and once he grants it, they set you up in a kuti. The Abbot told me that the monastery is capable of hosting 300 people at a time, but the population varied between 25 students and 50 students in my week there. But 150 Thai teachers were due to arrive the day after I left.

the people
Most of the students there were foreigners, and only a handful were Thai. It seemed like the vast majority of the students were beginners and only there for a few days, though there were some staying several weeks or months. There were a lot of hippies, curious long term travelers like myself who just happened upon the place, and people into eastern thought and alternative medicine and healing.

the meditation
The type of meditation we did was Vipissana which attempts to teach every student to recognize the “true nature of things.” In practical terms, this particular monastery taught the student to focus the mind on a single object, the breath,  and this practiced is supposed to eventually show that the mind and body are two separate entities. When the mind starts to wander, the meditator is supposed to recognize that these distracting thoughts are impermanent (as is everything in the world), and that we are not defined by these thoughts. More on this in the next post… 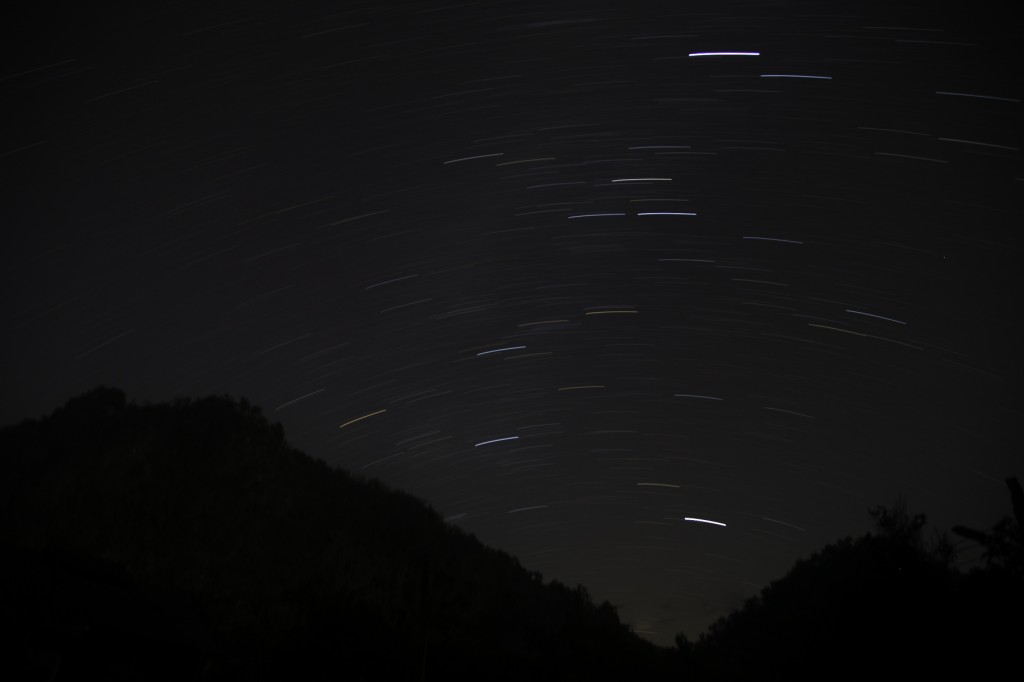