I am not a cave person. I find them grotesque and eerie. They’re dark and dank, and I can never remember which is a stalagmite and which is the other stala-thing. Public education, baby!

Also, nothing good ever happens in caves. That’s where Gollum lived and went bald, and Frodo  wins the ring after an annoying game of riddles. Harry has to force Dumbledore to drink poison in a cave for a POS horcrux that ends up being a fake. And the Buddha found enlightenment in a cave… ok, maybe some good things happen in caves. But mostly bad.

The highlight of our 4-day motorbike tour of central Laos was a visit to Konglor Cave, a massive hole in a mountain that you can float through on a river. I wasn’t super stoked to see it, but it turned out to be pretty sweet. 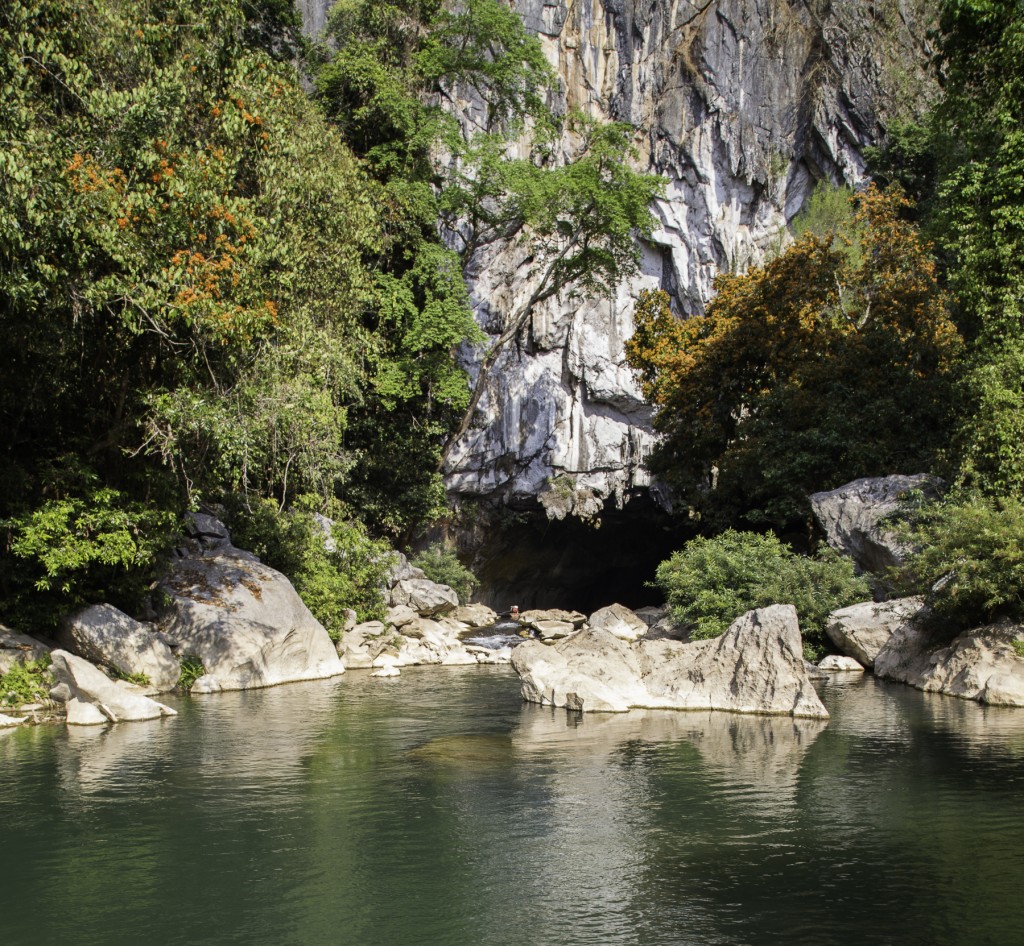 the entrance to Konglor Cave

The boats are shallow, narrow wooden long boats with three rows that fit one average-sized person each. And with just four of us in it (three being below average and Matt being ginormous), we were already riding pretty low. But that may have been because our boat already had some holes in it.

Seconds after leaving the mouth of the cave, you are plunged into total darkness. The only light comes from the headlamps you and the crew carry, but even with those, vision is limited to what those beams can illuminate. My shitty little $3 headlamp from Wal-Mart was put to shame by the crew’s intense, high-powered lanterns, and mine was only good enough to light up the back of Matt’s head two feet in front of me. Note: if a place offers you headlamps, accept them. Don’t assume your American-purchased one will excel purely because you are an arrogant asshole like me.

The crew rapidly sweeps their lights back and forth in front of the boat, and initially, I was like, “Oh, cool, they’re helping us see the cave.” But I soon realized they were moving the lights so they didn’t smash us to bits on the jagged rocks and giant logs hidden in the water. We were moving at a pretty good clip, and the obstacles whizzed by at uncomfortably close margins, but what could I do? These guys do this for a living, so they must know what they’re doing. Right? I just continued studying the back of Matt’s head.

Not too long into the journey, they land the boat on a beach in the cave, and you walk overland to look at some stala-things while the boat continues on the river. There are colored lights set up to highlight some formations, but all I saw was a bunch of rocks. Yay. After a couple hundred meters and lots of lit up rocks, you rejoin the boat and hop back in.

The cave is huge, though it’s hard to see everything as you fly by. At times the walls are a few feet away on either side, but often, they are much more spread out. The ceiling varied from 10′ above us to at least a couple stories. During the rainy season, it is sometimes impossible to pass through on the river because the narrower tunnels completely fill up.

February is in the dry season, so the water level was pretty low, and there are a few places where the boat scraped over rocks. On this leg of the journey, we were going upstream. With the water so low, there are these “rapids” that are exposed. As we approached one that was only several inches high, this was my stream of thought:

Our crew launched us UP a rapid in our wooden boat. After momentarily being shocked, Matt and I just shook our heads and laughed. “Oh, Southeast Asia, you silly bitch.”

Then we notice some splashing behind us and turn around. The motor guy is BAILING WATER out of the boat. But his unhurried attitude tells us that this is a common occurrence. I tell Matt, “Don’t worry about it, just look forward.”

We reached another rapid a bit later, but this one was made up of several cascades. Fortunately, they had us hop out onto some land while they dragged the boat over the rapid. Shortly after, we emerged from the cave on the other side of the mountain after having been underground for half an hour or so. On this side, there are a few stalls set up selling drinks, snacks, and some homemade textiles. Some people opt to stay at homestays to get a taste of village life, but we didn’t do this. There are also many homestays on the entrance side of the cave, which is where we stayed.

All in all, it was a pretty fun adventure and worthwhile to see. I’m still not a cave person, though. 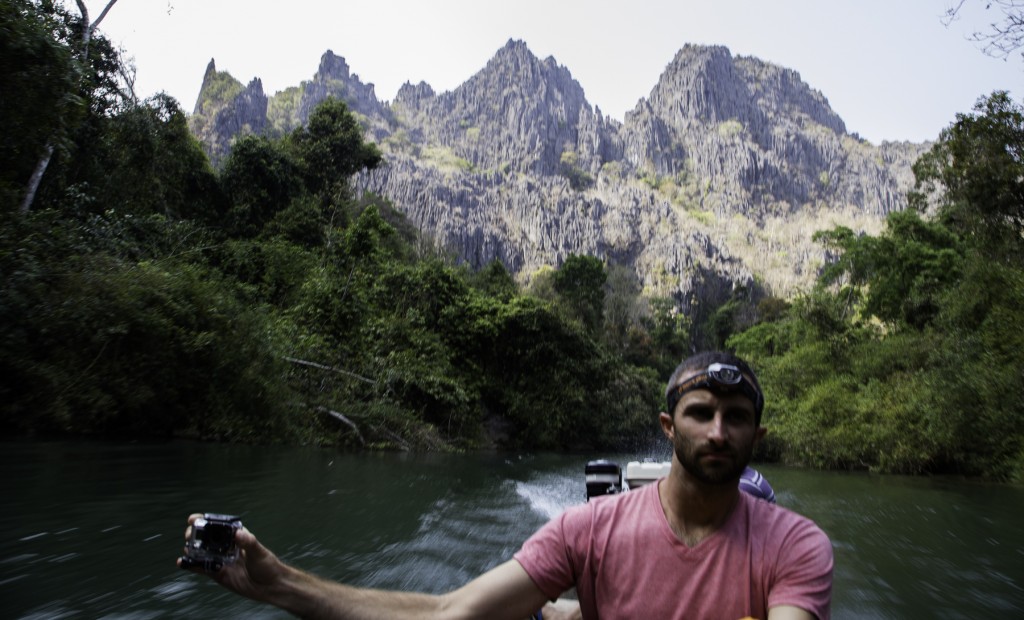 If you go:
Entry to the park is 2000 kip per person. Entry to the cave is 5000 kip. And then boat service is 100,000 kip per boat which they say can fit only two passengers along with the steersman and motor guy, but I’m sure a little bribe could get at least five passengers per boat. Not that that’s a good idea…

We stayed at Enjoy Boy Guest House in Konglor, about 2km from the cave. No wifi but decent rooms with hot showers and a nice restaurant. Great view of the river. 50,000 kip per room. Walk to the cave and avoid having to pay for parking. 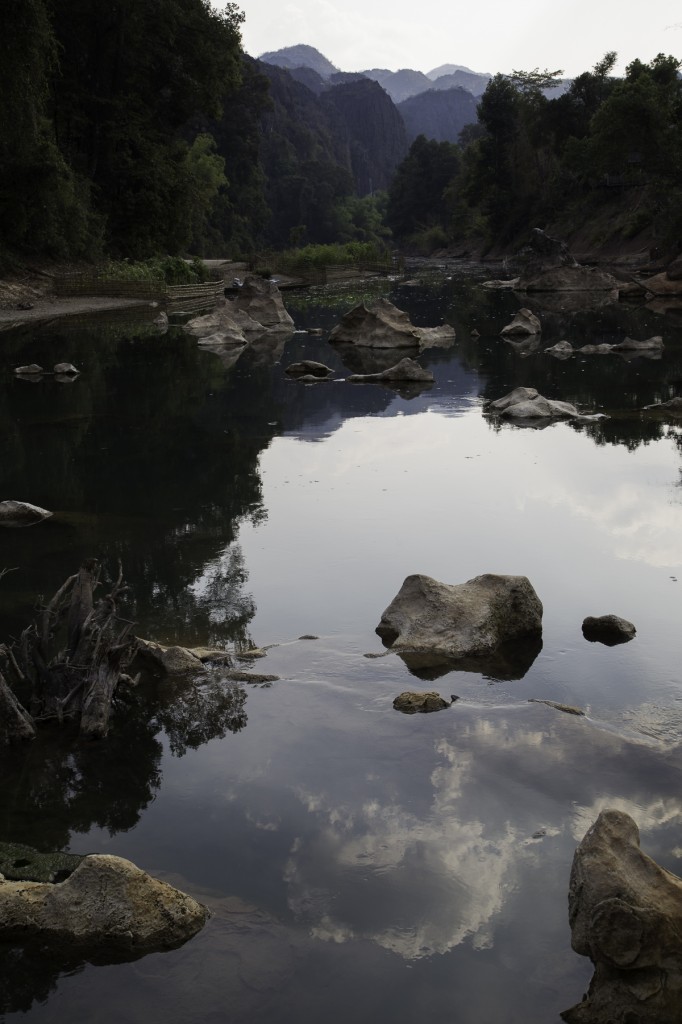 the river from our guest house