Unfortunately, the van was full of mosquitoes who were keen on engaging all of us. Within seconds of being in the van, the air was filled with high-pitched whining, hands clapping, and cursing in various languages.

At one point, I was surrounded and just started swinging wildly. A more accurate term is probably “flailing.” The older of the two laughs loudly and says something to me in Korean. I shrug my shoulders in my usual amiable “I have no idea what you’re saying but you seem nice” way. We have a fun little charade game where neither of us knows what the other is saying, but we laugh and smile anyway. 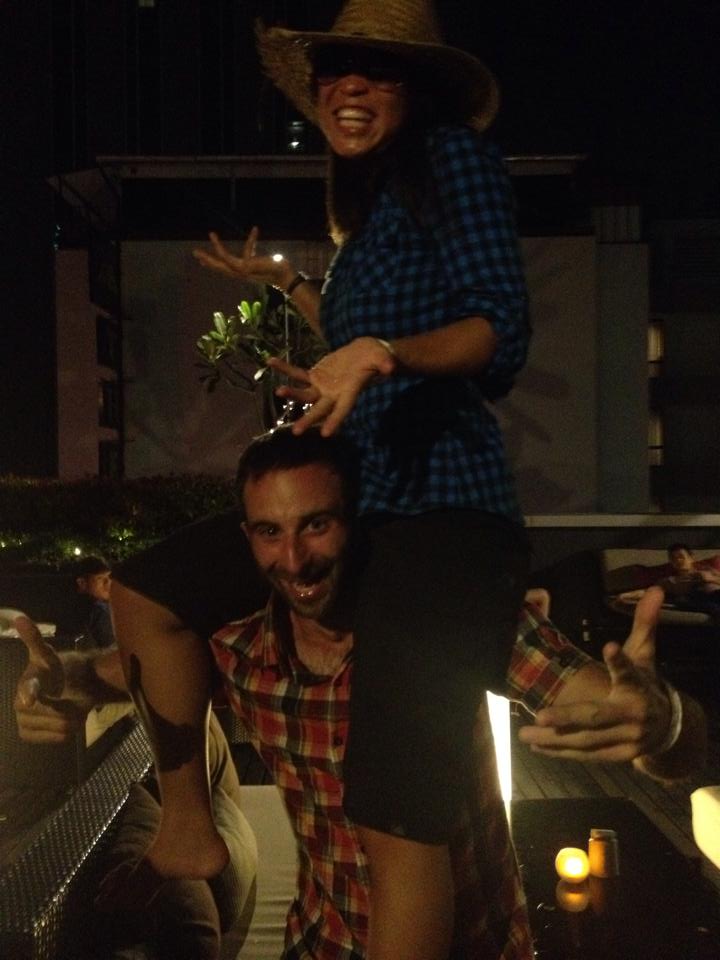 He continues talking to me as I keep up the swinging, and I finally kill one! I triumphantly show him the splat on my hand, and he cheers. We laugh some more and then go back to zoning out.

A few minutes later, a couple mosquitoes start pestering him, and he swings and even starts kicking at them! This is not the greatest idea since he was trying to kick them against the back of the driver’s seat, but I don’t know “hello” in Korean, much less, “Excuse me, but please don’t kick that chair because you might accidentally send us over these sheer cliffs.”

I’ll work on that when I get home.

But we laugh some more over his antics. And then he pulls out a bag of delicious milk chocolates and shoves a handful into my hands. As we eat some, he unzips the chest pocket on his friend’s shirt and begins putting the empty wrappers in the pocket. I laugh some more, and he gestures to me to do the same. Not wanting to disappoint the older of the two (what? I aim to please, and he was clearly the patriarchal figure), I start putting my empty wrappers in this other guy’s pocket, too, to the great amusement of the older one. The younger guy just wore the look I often see on my friends faces when I pick on them: defeated exasperation. The older guy says something in Korean, which I’m going to assume was: “Hahaha! This guy is the trash can! Hahaha!”

Some time later, the older guy catches a mosquito. Surprised by his success, he stares at the bug on his hand with disgust. And then he suddenly wipes it on his friend’s leg and cackles. He kills a couple more and does the same thing, me laughing the whole time, and his friend pretending to fight back. A bit later, I flail about and catch one. The older one cheers and then guffaws as I suddenly wipe the bug on the younger guy’s other leg! The poor guy yelled, “Oi!” and tried to wipe the bug back onto my leg.

None of us spoke the same language, but we didn’t need to.

why are you soaking wet?!
We had just arrived in Malaysia, at a mall in Georgetown. I went to use the bathroom and was pleasantly surprised when I realized they were Western-style. Unfortunately, the button to flush the toilet didn’t seem to work. I was pressing, but nothing was happening. Fortunately, there was a hose, and I assume that it’s like those toilets where you flush it by pouring water down it.

I make an unfortunate amount of assumptions. And yes, what they say about assumptions is true.

I turn on the hose but the pressure is way more than I expect and starts spraying everywhere, and it jerks out of my hand. The hose falls and is writhing around on the ground, and water is spraying and splashing all over the place. At some point in the madness, I hear someone in another stall yelp, probably because water was splashing on her from an unknown source. Never a good feeling in a bathroom.

I finally manage to turn the hose off, but I’m completely soaked from the stomach down. The rest of me has random splotches of water on it; parts of my hair is dripping, but other parts are bone dry. I wash my hands and barely notice there aren’t any hand towels because what good would that do? A sham-wow couldn’t even help at this point.

I exit the bathroom without making eye contact with any of the women in the long line, and I’m barely keeping it together. Then I see Cara and Matt waiting outside, and their looks of bewilderment when they see me is too much. “Why are you soaked??” I laugh uncontrollably and collapse against a wall for a few minutes before explaining what happened.

A few days later, we are back at the same mall and I somehow end up in the very same stall. With terror rising in me, I recognize that I clearly did something wrong the first time. I try the button a little more persistently this time. And guess what? It works fine; you just have to press a little harder than normal.

the haircut
I was walking back to our guest house in Luang Prabang, Laos. We had spent the day in various coffee shops working on our blog and photos, but Matt had left a while earlier to get a haircut. On my way back, I texted him to see if he was ready to eat, but I never got an answer. This perplexed me since Matt is always really good about responding quickly.

As I entered our room, I heard Matt call out from the bathroom. “Hey…”
“Hey, how’s it going?”
“Uh. Not good. I tried to give myself a haircut.”

Again, I was confused. When Matt said he was going to get a haircut, I assumed he meant he was going to have someone else do it. There was a salon literally two doors down from the guest house. And haircuts have been costing him very little in Southeast Asia, around $2USD, so this seemed like an odd thing to try to save money on. But he had disliked his last haircut and decided that he could do it better since he had cut his hair for years at home. He was wrong.

After some cajoling and another 15 minutes of intermittent buzzing and nervous laughter mixed with swearing coming from the bathroom, Matt finally emerged.

My eyes widened and I burst out laughing. “Oh my god! PUT YOUR HAT ON. RIGHT. NOW.”

It looked like Matt had gotten into a fight with a lawn mower and lost. The sides of his head were patchy and the hair length uneven. The back of his head was even worse because he had been unable to see it at all. The top was still long with longer patches hanging off in random places over the side of his head. Apparently, the clippers he was using didn’t work very well and he had accidentally ended up buzzing one area too short. In his attempts to even things out, the situation only got worse.

He threw his hat on, and we left to get food and see if the salon was still open at this hour. It was, and as the guy came out, his eyes also widened. He said something in Laotian that I’m going to assume was, “What happened here?!?” or “Who did this to you?!”

Matt, nearing panic, gestured awkwardly at his hair and tried to explain what he needed. But this was unnecessary. Anyone could see what Matt needed: better judgment.

Soon enough, the barber had fixed things up as best he could. He overcharged Matt (50,000 kip, or $6.25USD), but desperate times call for desperate measures. This is the shortest Matt’s hair has been in years, but you know what? At least he doesn’t still look like this: 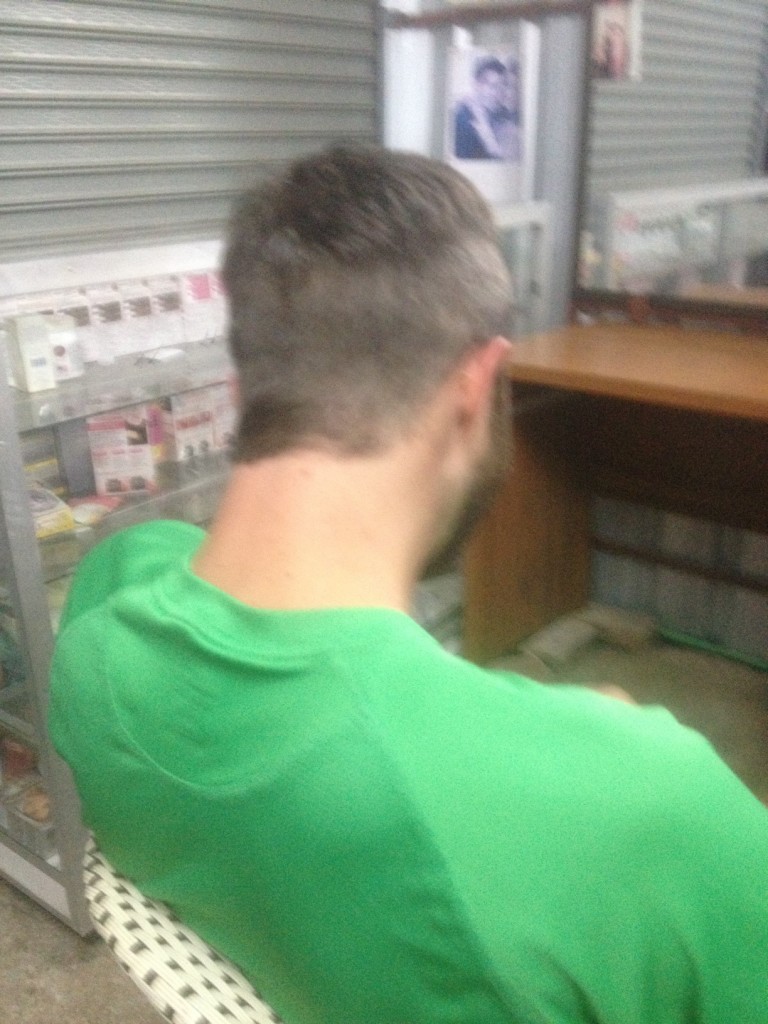