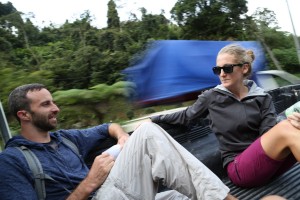 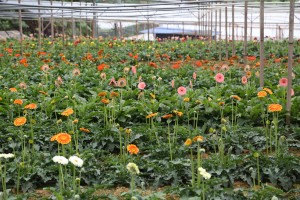 Gerber Daisies growing at our hostel’s farm. Most of these will be discarded as unsaleable, as they must be perfectly flat, with straight stems well over a foot long, to be sold to flower shops for less than $2 per 10 stems.

The Cameron Highlands sit at an elevation approximately equal to that of Denver, and the cool climate was a nice relief from the heat of Penang and Thailand. The hills and valleys are filled to the brim with greenhouses growing flowers, fruits and vegetables, and sprawling tea plantations that cover thousands of acres. It is on one of these flower farms that Troji’s upcoming hostel is located. He was an active couchsurfer for years and is now close to realizing the dream of running his own hostel. We were the only three staying there at the moment, in a building designed to sleep at least 27, and it was quite a unique experience. He took us to the night market and introduced us to delicious Apam Balik (Ban Jian Kuih in Chinese), a crepe with peanuts and sugar on the inside and butter on the outside. Afterwards, we sampled Durian for the first time and had some delicious fried shrimp that Troji called “pee prawns” because they will urinate themselves to death by dehydration as a defense mechanism. Still delicious. 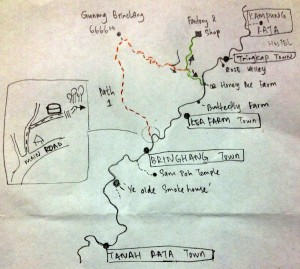 The next day we set out to explore the Cameron Highlands with a map of the area that Troji had drawn, complete with insets and detailed road and trail curves. Hitchhiking the previous day had been so easy that after two minutes of rejections, we were starting to wonder what was wrong with us. Surely they couldn’t smell us all the way inside of their vehicles! But just as we started to worry, a driver pulled over and we hopped into the back of another truck. The first stop was a honeybee farm, which proved to be quite boring and disappointing. It was also not strawberry season, so picking our own at the nearby farm was not an option. Time to hitchhike further South to Brinchang and this time we got picked up in a Ford Escape by Larry, a retired school teacher who had recently moved to Ipoh. He asked if we had visited Tanah Rata (further South than we planned to go), and when we said no, he advised that we definitely stop there. So we decided to just go with the flow and had him drop us off at his final destination.

Panorama of the Boh Tea Plantation in Cameron Highlands.

As we got out of the vehicle, I looked at where we were on Google Maps (the only thing that keeps me from panicking and feeling lost at all times) and noticed a waterfall nearby. The bus station had a map showing it was an hour round-trip, so we set out to find the trail. The trails in Cameron Highlands are numbered, and this was #9. We ended up taking the trail all the way through after a local told us it would end at the Boh tea plantation. In reality, we ended up at a road about 5km from the plantation and all uphill. A local tour operator saw us and offered us a ride to the plantation and back for 50 ringgit (about $15). Hitchhiking had been so easy to this point, we declined and waited on the side of the road. 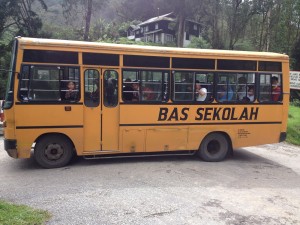 Our favorite hitch, the school-bus full of children. “Hey Lloyd, look, there’s some people who want a ride too!”; “Pick ‘em up!”

The first vehicle headed our way was a bus, and it seemed like there was no need to try to hitchhike on that vehicle, since we didn’t want to pay any money. However, as it neared, the driver flashed his lights and so we stuck out our thumbs. It turns out that it was a school bus full of children headed home for the day, and apparently it is no problem in Malaysia to just pickup some hitchhikers on your local school bus route. The driver was clearly in a good mood, joking with some of the kids the entire ride and putting a smile on all of their faces. The experience reinforced our beliefs, a week into Malaysia, that these are some of the friendliest people we have encountered in our travels so far.

After exploring the plantation for an hour or so, it took us an additional three rides to get back to our hostel, two of which were with Muslim couples who were visiting the Cameron Highlands from elsewhere in Malaysia. One of the couples, Anwar and Farrah, was actually on their honeymoon, although they had wed two years prior. They were tired of just sitting in their hotel room and seemed to enjoy the adventure of picking up some hitchhikers, even driving us fifteen kilometers past their destination to drop us at our hostel. 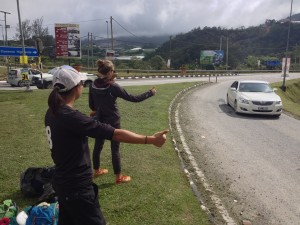 Lisa and Cara attracting our ride from Cameron Highlands to Ipoh. Surprise, there’s a dude here too!

All of these great experiences increased our confidence and we decided that the following day we would attempt our longest hitchhike, from Cameron Highlands to Ipoh, about 70 kilometers. Troji dropped us at the junction out of town and we hopped into the back of a truck for a couple kilometers to get to the road back to Ipoh. We endured fifteen minutes of agonizing rejection, including many drivers who would wave us off and point ahead (“yes, that’s the direction we want to go!!!”) and the tour bus driver who reached out his window and gave us a thumbs down. Finally, however, two Chinese women driving a van stopped and let us hop into their vehicle. This was a great outcome, as we were not excited about the prospect of the back of a pickup for an hour on the winding roads ahead. Neither of the women spoke any English, but enough was communicated to know they would take us to Ipoh. What we hadn’t counted on is that they would refuse to just drop us at the side of the road, and instead drove us all the way to our hotel, dropping us off in front of the building after making several phone calls to determine where we actually needed to go. At several points they had repeated the word taxi, and I tried to make it clear we were happy to get out and take a taxi. Lisa remarked that they were probably just telling each other that they were our taxi service now, as they never seemed to want us to get out before our destination.

Hopefully this photo will be hanging on the walls at Westwood Highland hostel soon.

2 thoughts on “Hitchiking in Cameron Highlands”