On Sunday we motorbiked from Đồng Văn to Mèo Vạc, over the Mã Pí Lèng Pass at 4,921 feet, on a road that was first built by minority ethnic groups living near the Vietnam border with China. Every bend in the road brought with it new peaks and amazing views, even if it was extremely hazy as had been the case all week in the North.

We were actually driving pretty slowly, so all of this footage is sped up. Now it won’t take as long to watch (but really, it just makes us look cooler).

As Lisa mentioned in her post on this topic, she had first heard about motorbiking Northwest Vietnam a couple months before our trip. I’ve always thought it’d be extremely fun to ride a motorcycle, but the fact that you will lose badly in any accident has always deterred me. So when Lisa mentioned it, my first thought was that it would be crazy and way too dangerous, but I wasn’t going to let that make up my mind! After all, the guidebooks were suggesting it and maybe if I scheduled some lessons before leaving, I could do it relatively safely. I mean, all transportation here is without seat-belts or rules of the road, so how much worse can this be? (ok, probably way worse).

So over the course of a couple weeks we psyched each other up by chanting “MO TOR BIKES” and fantasizing about riding through the mountains on some transportation neither of us had driven before. The guidebook itinerary called for up to 10 days of motorbike exploration, but I had just weeks earlier booked a ticket from the Philippines to Malaysia for another regional ultimate tournament. With this newfound excitement, I decided to ditch that ticket so we could maximize our time in Vietnam, and fortunately it cost less than $40 for that mistake.

As our trip approached, I had penciled in dates for a motorcycle course, but things got too hectic and I never managed to make it happen. As we arrived in Hanoi, it became clear that there was no way I could navigate traffic in a Vietnamese city, so riding from Hanoi was out of the question. I continued to ask everyone we met whether they thought someone with no experience could ride a motorbike in the North, hoping that people would tell me what a crazy idea it was. Instead, they just kept saying, yeah, just go slowly, use your horns and mirrors and yield to anything larger than you. NO! You are supposed to be talking me out of this!

The road from Đồng Văn to Mèo Vạc.

In Hanoi, we stayed in a converted pharmaceutical factory with Hoang and he took us to several events out on the town. One of them was a restaurant opening where we had met a French man living in Hanoi who told us that if we had never ridden bikes, we should do so from Đồng Văn to Mèo Vạc. He assured us that the road was stunning and in good condition. Yet another failure to find a voice of reason.

As we progressed through our itinerary, from Hanoi to Cao Bang to Ha Giang, we kept telling each other what a great decision we had made not to ride motorcycles during any part of the trip so far. The roads were filled with crazy bus drivers, huge trucks and sometimes large sections of rocks, mud, and plenty of other obstacles that we would not have been prepared for. I had been reading up online and several people mentioned that hiking the pass was a great way to see it, and had resigned myself to that being our best bet.

We got to Ha Giang around 11:00am on Sunday, too late to see the weekly market, and checked into our homestay for the night. I decided to do a quick translation of “rent motorbike for 5 hours” on Google in case I happened upon a situation where this looked promising. This i sour newest form of communicating, and reminds me of the babel fish from Hitchiker’s Guide to the Galaxy that resides in your ear and will instantly translate any language. As we headed out on the street, I showed it to the lady we were staying with and she called over a gentleman who spoke pretty good English. We hadn’t really heard English for a few days, so it was somewhat of a surprise, but we were back on a more regular tourist circuit, so we would encounter that several times today. 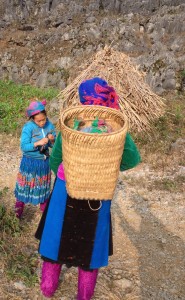 He told us it would cost 150,000 dong ($7.50) to take the bike for the next five hours, a rate we were willing to go with. The problem was, actually facing a motorbike and the opportunity to ride one for the first time, I realized I didn’t know how to shift, brake, turn it on, where the horn was or really anything that someone who is about to ride a motorbike should know. I translated “automatic” for him to ensure that we would get a bike that could shift more or less on its own, but it became clear he didn’t have that. That’s when we made the decision that, you know what, this was a dumb idea in the first place, why did we think we could do this? Let’s just hike to the top of the pass and then return before sunset.

As Lisa mentioned, it wasn’t very long before we came across an actual motorbike rental shop, and before I knew what was happening I was showing the guy my translation that said we wanted to rent automatic motorbikes for 5 hours. Yes, let’s do this. It turns out that Lisa has more of a grasp on the Vietnamese language than she initially realized, and it has been improving throughout the trip. So she managed to communicate to this guy that, really, the only catch was we didn’t know how to ride a motorbike. We both focused quickly as he ran through the controls to turn on the bike, shift gears with our left foot, brake with our right foot and hand, and accelerate. Other renters we had talked to had to leave passports to take possession of a bike, but for this guy, just one credit card for two bikes to people who had never ridden them before. No waivers, but fortunately Lisa remembered the helmets.

It took a few minutes for the second bike to arrive (they had plenty, but once they heard we didn’t know how to ride, they selected specific bikes that we decided they were willing to have damaged). As I was being shown how the second bike worked, Lisa drove off. I looked up when I heard some yelling, and saw her heading towards the curb. Phew!, maybe this isn’t going to work out and I won’t have to look like an idiot. I decided to just hold tight to see if we were still going to be allowed to take the bikes after that initial showing. Turns out, that wasn’t a problem at all for the people renting them, and Lisa gave me the thumbs up, so now it was my turn to awkwardly rev the engine and practice a haphazard turn.

It wasn’t until we were about 30 minutes down the road that I realized I had no mirrors. No big deal, just the most important thing that our Australian friend Celli had told us to pay attention to when we were getting a bike. He seemed to think it would be a good idea to know when busses and trucks were barreling down on you from behind. At this point in the journey, I asked Lisa, who had two mirrors, to kindly go behind and honk like crazy if she saw anything coming.

It was slow going at first, as I got acquainted with shifting, braking and turning, but before long we were zipping along down the road. This was way better than walking, and we were so far North that there was very little in the way of traffic! We started out going only about 15 miles per hours, and never really got much above 25 mph for the whole ride, but that still felt plenty fast and was very thrilling! Afterwards, we were both convinced that the motorbikes had redeemed our last few days of uncomfortable travel and I was already looking forward to the possibility of riding them again once we head South towards Hoi An or find some relatively peaceful streets.

Google may say it only takes 28 minutes to drive this road, but after seven hours on a route that Google said took three, we learned not to trust their estimates in Northern Vietnam.