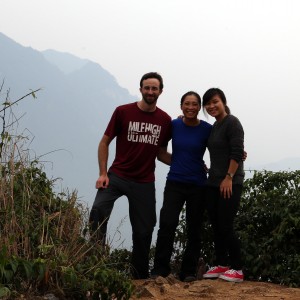 Thao, our couchsurfing host in Ha Giang, went out of her way to make our experience enjoyable and comfortable! Such an adventurous spirit, and despite what she may tell you, an excellent cook!

After a week of exploring Northern Vietnam, Lisa and I headed to Cat Ba Island. Our journey started in Ha Giang on our first overnight sleeper bus followed by an immediate connection to a five hour bus/bus/boat/bus trip from Hanoi to Cat Ba Island. As I’m writing this a few days later, that trip doesn’t seem bad when compared to our 25-hour bus journey from Cat Ba to Hoi An (budget travel!). We chose to skip the usual tourist route of spending a night or two on a Vietnamese “junk ship” in Ha Long Bay, to instead craft our own adventure in the area.

As we stepped off the bus with only a vague idea of a hotel to check out, we quickly found that it was low season in town so every hotel was begging for our business. We checked out a few places and for $6 a night we got a room with two beds, wifi, and a hot shower — some of our cheapest accommodation in Vietnam outside of couchsurfing, but pretty typical in terms of quality. The bathrooms here are always all-in-one shower, toilet and sink areas which means everything including the toilet paper gets soaked when you shower.

View from our hotel in Cat Ba, Vietnam

As we surveyed the streets, it was obvious we were firmly back on the tourist circuit. It was a nice change of pace to get by with English and converse with people for a few days. We ran into Cara from Vermont on the way to drop our bags at the hotel, and she invited us to join her for drinks later that evening. We would become fast friends, all hanging out together for most of our time on Cat Ba and then parting ways a couple days later as we headed in opposite directions.

After checking in, we headed to Asia Outdoors to book my adventure for the following day. I had read online about deepwater solo rock climbing. This is rock climbing without any ropes or gear (other than shoes) and when you fall, you simply fall into the water. Tides control access to the rocks and we had only one day left before it would be unapproachable for a week or so. The second half of the day would then be kayaking through the bay. As I booked the trip, Lisa decided to do a full day of kayaking. The limestone spires of Lan Ha Bay would be our playground the following day.

Although a lot of the more experienced climbers I talked to on the boat considered deepwater soloing “a novelty”, for me it was the best. Done climbing on this wall for a bit, time to jump in and take a swim! I’ve only climbed outdoors once before, and generally feel safer and have a better time inside the bouldering gym where you don’t have as much gear and it feels like a more relaxed environment. If it wasn’t for the uncontrollable shivering due to the chilly weather, it would have been a perfect day.

After that, I was paired with Marie from Sweden and we joined up with Lisa, Cara, and Nick to paddle around the Lan Ha Bay, a smaller, less-crowded area inside of the larger Ha Long Bay. This trip was filled with paddles into hidden lagoons, where if we stopped for long enough we would see and hear macaque monkeys playing in the trees above.

We had a great time with Asia Outdoors. Nick had checked us in at reception and hung out with us during the kayak and boat portion of our tour. Kate had been wonderful replying to emails in advance of my trip and then helped me get onto the rocks during deepwater solo. We met up with Cara at the bar above Asia Outdoors that evening and Russell from Asia Outdoors, who we hadn’t met previously, hung out with us until it closed down at 2:00am. At which point, it was time for my third “Bahn My Doner Kabob” sandwich of the evening that followed stir fry noodles and a bowl of pasta. While you can get street food for around $1/meal, it doesn’t always fill us up, and after a day of activity I couldn’t stop eating!