About five months before the trip I joined the couchsurfing community and started hosting people to get a sense of it all. As our trip neared, I started reaching out to a few surfers in the Philippines to see if they had suggestions for my planned itinerary. One surfer I messaged, Efren, was based in El Nido. When I mentioned I would love to do a camping trip to a nearby island and asked if he knew who I could contact to do this, he said he could not only organize it as a do-it-yourself trip, but also probably host us! By the time we finally made it to El Nido, he had been getting inundated with couchsurfing requests and was looking for a small break (which for him meant only hosting a couple people in his place, so he could sleep in his own bed). So while he hosted Gilad from Israel (on a shared bed) and Darren from Manila (in a tent on his porch), he hooked us up with a beachfront apartment next door for only 500 pesos a night (about $12). 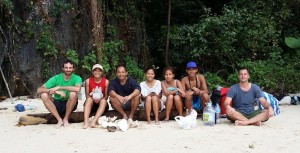 Efren is one of those hosts who goes out of his way to make your stay as enjoyable as possible. He has all of the local knowledge, let us know what we should be paying for everything and made great recommendations. He has fully embraced the couchsurfing lifestyle, and is working on two huge projects at the moment. The first, is building a survivor hostel on the beach just outside of El Nido. His goal is to show travelers that El Nido does not have to be as expensive as its reputation would lead you to expect. The second is a year-long trip through Southeast Asia on no money. He has sponsors who are outfitting him with plane tickets and some gear, but after that he will hitchike, camp, eat and couchsurf all with no money whatsoever. He has some experience already, being an avid hitchiker around the Philippines and having traded work in a Thailand hostel for lodging, food and beer over the course of a month.

All of that is to say that we couldn’t have found a better host for El Nido and someone to plan our overnight do-it-yourself camping trip. He had rounded up several other travelers and his friend Jeerly from TayTay to join us, so we would be a group of eight. When I say do-it-yourself, I was basically just along for the ride. Darren was in town from Manila, where Efren is well known amongst the couchsurfing community. He and I were put in charge of going to the open-air market and getting the supplies for the trip: 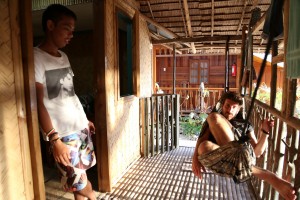 Efren and Gilad hanging out on the porch

Since Darren spoke Tagalog, he was clearly in a much better position to negotatiate prices and order the food. Richard from Munich, who I had convinced the previous day to come along on the trip, joined us at the market. We both just followed Darren around holding the food and receipts he was accumulating and feeling pretty useless. Not only was I lost at a fresh fish market where the seafood is splayed out in front of you and you can choose from any items you want, I wouldn’t even have a clue how to clean and cook any of it if I had bought it myself! We left with all of the above for just over 1,000 PHP ($25 USD) and Jeerly would later show up with four liters of Tanduay rum, six liters of Coca Cola and some ice.

We had planned to leave around 4:00pm in the afternoon, which I was worried would be too late to setup camp and enjoy the beach. As we boated to our island with the sunset looming, we stopped first at Pinagbuyutan island, which we were told is listed in the book 1,000 Places to See Before You Die. Efren hopped off to talk to the island caretaker to see if we would be allowed to sleep there that night. The issue was that Survivor: Israel is currently filming on the island. Since they planned to film the following day, we were turned away and headed a short ways further to Lagen Island. There are a few small sandy beaches on this island, and on the West side of the island they are built up with resorts. We were unaware of this until I later checked Google Maps, however, as the Northwest beach we camped at that night was deserted and the cliffs would prevent anyone from traveling from one beach to another via land.

When we landed, Lisa and I started hunting for some firewood, Efren and Gilad got the fire started and Darren and Jeerly quickly took to getting the charcoal pits fired up and dinner started. The sun was setting at this point, so we also took to setting up camp, which really only required hanging hammocks from nearby trees. After a few failed attempts at knot-tying, we were setup for the night and ready to begin eating. Efren is all about surviving minimally, so we had none of the usual plates or utensils one might expect. Instead, we ate with our hands and used large leaves from nearby trees as our plates. The food was amazing — all of the meat had been prepared with garlic, soy sauce, and kalamansi, we had a tomato and onion salsa, grilled eggplant, cooked rice we had brought from home and more food than the eight of us could possibly finish.

As someone who is an admitted germophobe, and sometimes picky eater, I knew Southest Asia was going to be a challenge. But I feel like I really held it together and made some progress, even eating squid after realizing it was being prepared in the same bucket I had used earlier that day to wash my socks and underwear. I just trusted my hosts that they knew what they were doing with the food preparation and so far I haven’t run into any problems!

After dinner we took to the ocean, surrounded by cliffs and other islands, under the nearly full moon. The moment was perfect and I was so happy to be there. 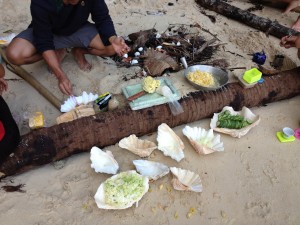 In the morning, Richard from Munich upgraded our dinnerware by collecting about 8 large clam shells that had washed ashore overnight. Breakfast was a buffet of cucumber, onion, scrambled eggs, bread, pineapple, and watermelon. The boat we had scheduled for 7:00am didn’t make it until well past 9:00, but just as soon as we had arrived on our own secluded island beach, we had to shove off and get back to El Nido.

All told, the do-it-yourself camping trip cost each of us 520 pesos ($12). This was largely due to the knowledge and bargaining that Efren had done, as he is very experienced with planning these trips. In two weeks he plans to spend a night with over 70 couchsurfers from Manila on Pinagbuyutan island. It’s too bad we won’t be in town for that, it is sure to be a fun time!

4 thoughts on “Camping on Lagen Island”